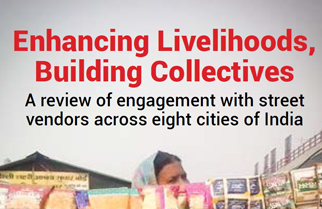 The central challenge for sustainable and inclusive urbanisation in India is to position quality employment along with quality habitat as the pillars on which cities should be developed and helped evolve. This challenge is significant when, in most regions of the Global South, informal employment accounts for more than half of total employment, and when self-employment outweighs wage employment. Within selfemployment, street vending is one of the most visible occupations.

The contributions of street vendors to urban life go beyond their own self-employment. They generate demand for a wide range of services provided by other informal workers, including transport workers, tea sellers, market porters, security guards, recyclers and others. They also generate demand for services provided by formal sector both public and private actors, including transportation, and formal shops and suppliers from whom they source their goods.

After a decade of struggle the Street Vendors (Protection of Livelihood and Regulation of Street Vending) Act, 2014 was passed to provide social security and livelihood rights to street vendors. However the effective implementation of the law and especially its key provisions is still a challenge in most cities of India. For instance, the presence of Town Vending Committees is still limited and the lack of identity cards or certificate for vending pose great challenges to street vendors and are important instances of the lack of implementation of the Act. To be made effective on the ground the of rights for street vendors needs to programmatic collaboration with the other labour struggles.