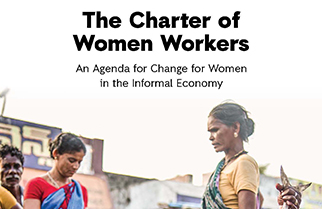 This Charter of Women Workers: An Agenda for Change for Women in the Informal Economy focuses on the most vulnerable of women workers. It has emerged through consultations held with women workers across a range of occupations and spread over many states. The document first presents a list of key issues regarding women workers in the informal economy that need to be dealt with. It then sets out an agenda for change that should be included in the recently passed legislation and the bills under consideration, namely The Code on Wages, 2019, the draft Code on Social Security, 2019 and the draft Code on Occupational Safety, Health and Working Conditions, 2018. Finally, this document lists sector specific issues that need urgent resolution to protect and promote the rights of women in the world of work, and especially the most vulnerable women workers in the informal economy. This document seeks to set out an agenda for change for women workers, focusing on women dependent on the informal economy.