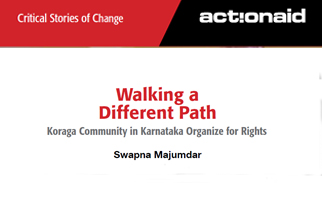 Critical Stories of Change is a series of stories describing the role ActionAid and its partners play in changing the lives of people living in poverty. The stories are written by independent writers who are encouraged to be open and critical in their approach while celebrating the role of individuals, collectives and organisations in building up a process of change. Critical Stories of Change is an exercise in exploration, of the efforts of grassroots organisations that ActionAid support and ally with, from the perspective of impoverished and excluded people.
ActionAid India looks to the process of developing these stories as an interaction with friends on their critical insights, suggestions and advice. The stories thus emerge as a product of a facilitated learning process involving both ActionAid India and its partners, with the objective of understanding how change happens for the benefit of the poor and deprived. We publish these stories with the confidence that the documented lessons and experiences will provide insights for all those engaged in the struggle against poverty and injustice.
Walking a Different Path: Koraga Community in Karnataka Organize for Rights tells the story of a particularly vulnerable tribal group that has faced population decline to the extent that their current numbers are dangerously low. The story is about their resistance to oppression, especially the continuing practice of an extremely pernicious ritual. The Koragas have also organized against malnutrition, for land rights, towards securing sustainable livelihood, revitalizing their culture and building their tribal identity.
We are grateful to independent journalist Swapna Majumdar for capturing and sharing this story. We are confident that this publication will be of interest to all people interested in eradicating poverty, patriarchy and injustice.