Where Will the City-Maker Stay? 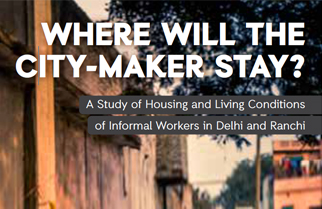 Where Will the City-Maker Stay? – A Study of Housing and Living Conditions of Informal Workers in Delhi and Ranchi seeks to extend our understanding of urban issues, especially regarding housing and shelter rights of workers in urban areas. “City-Maker” is a term that we are striving to make popular to refer to homeless citizens, seeking to highlight the vital role that informal workers play in making the city. The ease, access and availability of adequate housing are vitally important to informal workers as this not only shapes their present but also secures their future and long-term aspirations. The existing elite-driven approach at its best is marked by the very limited manner in which it engages with the housing conditions of informal workers, seeing it solely as an infrastructure issue. This report highlights the urgent need to broaden the understanding of the issues faced by informal sector workers in accessing housing facilities, going beyond mere infrastructural concerns.

A key lacuna in understanding “liveability” for the urban informal workers is the total lack of or very limited insight available to understand the overall well-being – social, cultural and psychological, of the urban poor as articulated by they themselves. Where will the City-Maker stay? Brings to the fore the quotidian, lived experiences of the urban informal worker. It reveals the recurrent fear of being displaced and the lack of information regarding government schemes; the need for privacy expressed against the context of many workers being forced to share the same room, as individuals and even as families; the dependence on private lenders and high interest rates due to inadequate government assistance; the need for legal tenure; and the expressed willingness to pay rent if suitable accommodation is provided.

Towards truly achieving the mandate of “Right to the City” as articulated in the New Urban Agenda adopted at the United Nations Conference on Housing and Sustainable Urban Development (Habitat III) in 2016, it is essential to develop critical insights into whether spatial access translates into the constituent population being able to accrue long-term material,social and cultural capital for a more consolidated “well-being” in the city. The policy framing, actionable investments and future research needs to direct its efforts towards meeting the housing and living conditions for the urban informal workers in a holistic manner, such that this constituent group of city’s residents can also claim these spaces as their “homes” with pride, dignity, self-respect and assurance. Where will the City-Maker stay? aims to provide a small contribution to this process.