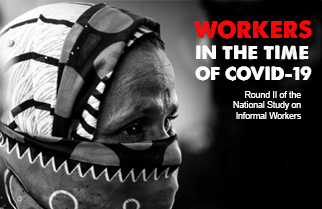 The outbreak of the COVID-19 pandemic in India was marked by a lockdown which brought the nation to a complete standstill. This was followed by a gradual phase-wise re-opening. The initial period of the lockdown was a time of collective hardship that exacerbated and exposed pre-existing crises of capital, care, caste, gender, and climate. Its impact on the lives and livelihoods of informal workers, especially migrant workers, was documented by Round One of this study. The report emerging from the first round has been much appreciated by academics, researchers, civil society, and policymakers and has been useful to both ActionAid Association and the many partners and networks we work with in our effort to support the most affected communities.

While the lockdown restrictions have been lifted, the deep distress in livelihoods and incomes of informal workers has scarcely abated. The effects of the massive shock to the system and the ongoing economic crisis have become clearer over the past few months, even as the damage to the socioeconomic gains of the past few decades in reducing absolute poverty, food insecurity, and numbers of out-of-school children is unfolding. As the crisis prolongs and takes newer forms, deepening fissures based on caste, religion, and gender, there is a pressing need for documentation of this unprecedented time. There is also an urgency for evidence from the ground to better inform policy.

The current second round of the survey was carried out from 23rd August 2020 to 8th September 2020, across 23 states and five Union Territories, cutting across the third and fourth phases of the re-opening of the economy. Interactions in this round covered a range of issues regarding the status of migration, livelihoods, and wages of informal workers, their savings and expenditure, and access to social security schemes and other entitlements. This report additionally documents the impact of natural disasters in this period on the most vulnerable populations, deepening our understanding of the multifaceted nature of distress and precarity faced by them.