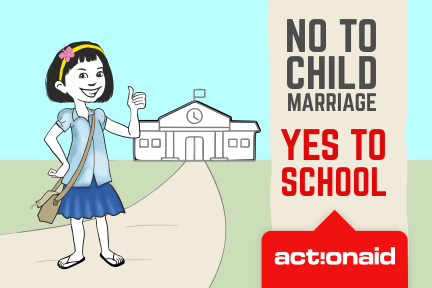 When Sarojini’s mother received a marriage proposal for her 15-year old daughter, many thoughts must have gone through her mind. She is a tribal woman, staying in a remote village in Odisha. Her husband, a carpenter, had died some years ago. Sarojini, who was studying in class nine in the nearby school, was the eldest child with three younger brothers.  Sarojini’s mother could have dispensed with one of her responsibilities as a single mother by marrying her daughter.  However, despite tremendous pressure, Sarojini did not agree to the marriage. Failing to convince her mother, Sarojini took the help of the police and with their help stopped the child marriage that was being thrust on her.Sarojini’s courage helped her escape child marriage and helped her secure her right to continue her studies. She is continuing her studies in the Arts stream in a senior secondary school.  However, there are many young children and adolescents who are victims of child marriage. This is despite a law against child marriage in force since 1929, which was made more effective with the passing of The Prohibition of Child Marriage Act, in 2006.In Eliminating Child Marriage, a report published by ActionAid Association, analysis of Census 2011 data showed that 103 million persons in India were married before reaching 18 years of age. Out of this, 85 million or 83% of the total number of child marriages was of girls. So it is not surprising that a UNICEF report found that at least one in every three child brides is in India.Even though the ActionAid report showed that the percentage of women in India in the 20 to 24-year age group married before the age of 18 declined by around 20.6% over the two decades between 1992 to 2012 the number of child marriages, especially of young girls, remains very high.Rural areas accounted for 75% of total child marriages in the country in 2011.  Uttar Pradesh, Andhra Pradesh, West Bengal, Rajasthan, Bihar, Maharashtra and Madhya Pradesh together contributed to 70% of child marriages in the country. In five districts in India, more than 50% of marriages in rural areas were child marriages; four districts belong to Rajasthan (viz., Bhilwara, Chittaurgarh, Tonk, and Ajmer) and one is from Uttar Pradesh (i.e. Lalitpur).The continued prevalence of the practice of child marriage despite the existence of preventive legislation shows the extent of the social sanction that is available for the practice.  In many traditions in India, the right time of marriage is seen as the time when the girl child reaches puberty.  In north India, the custom is that even after a child marriage, the “bride” stays at her natal home till she reaches puberty and only then is the marriage consummated.  While socioeconomic factors are important, the ActionAid report shows the prevalence of the practice among even the wealthiest households stands at over 30%, both in rural and urban areas.There is indeed greater need to ensure gender-sensitive education programmes to improve girls’ and young women’s access to education because ensuring enhanced educational participation will greatly reduce the likelihood of child marriages. 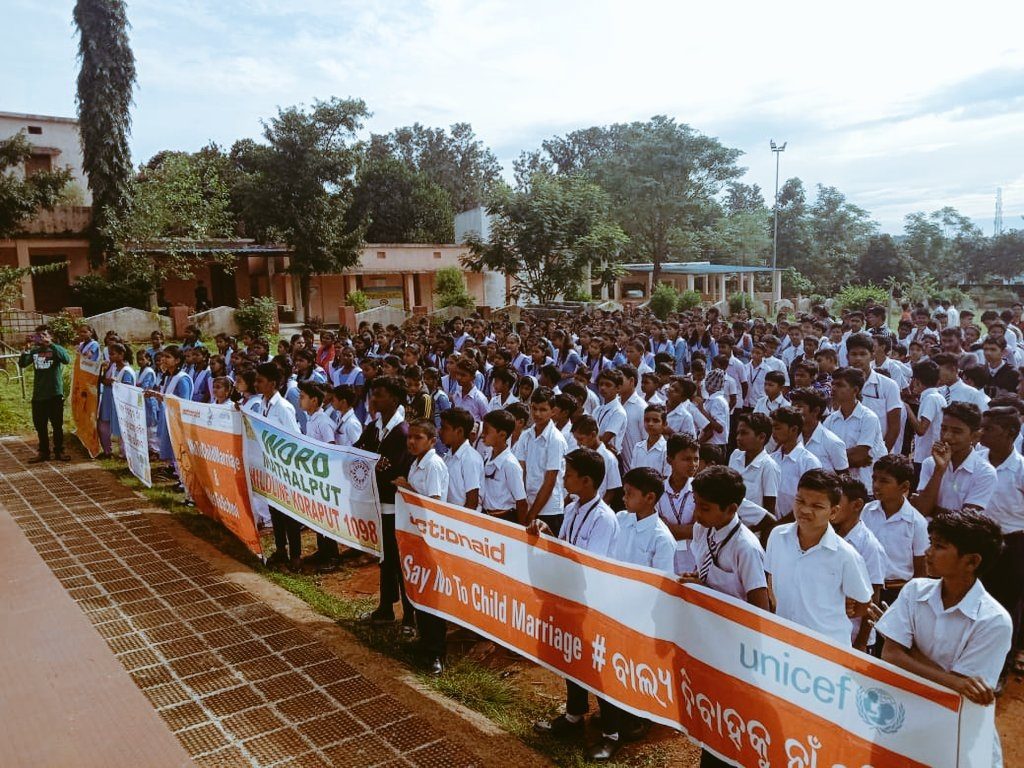 Say No to Child Marriage and Yes to School Campaign

No to Child Marriage, Yes to School Campaign

ActionAid Association, working with UNICEF, launched the “No to Child Marriage | Yes to School” campaign.  Launched in the end of October 2019, we have reached out to more than 1.4 lakh students in a little less than 2,000 schools across 13 districts in the Bihar and Odisha. This campaign is being extended to districts in Rajasthan, Tamil Nadu and West Bengal. The objective of the campaign is to build youth and adolescents as agent for change to bring about a transformation in social mindset that sees marriage as the only avenue for personal and social fulfilment for children, especially girls and young women.The campaign seeks to inform communities on how child marriage is a harmful traditional practice that violates child rights. It seeks to spread awareness that although child marriage adversely affects both boys and girls, it perpetuates discrimination against girls, not only denying them of their childhood but also socially isolating them, keeping them cut off from family and friends, without a support system. This also leads to a lifetime of domestic and sexual subservience. Child marriage has important consequences on the development and full growth of the girl as it is associated with increased risks of maternal and child mortality, intergenerational transfer of nutritional deprivation, and limited opportunities for education and economic empowerment. 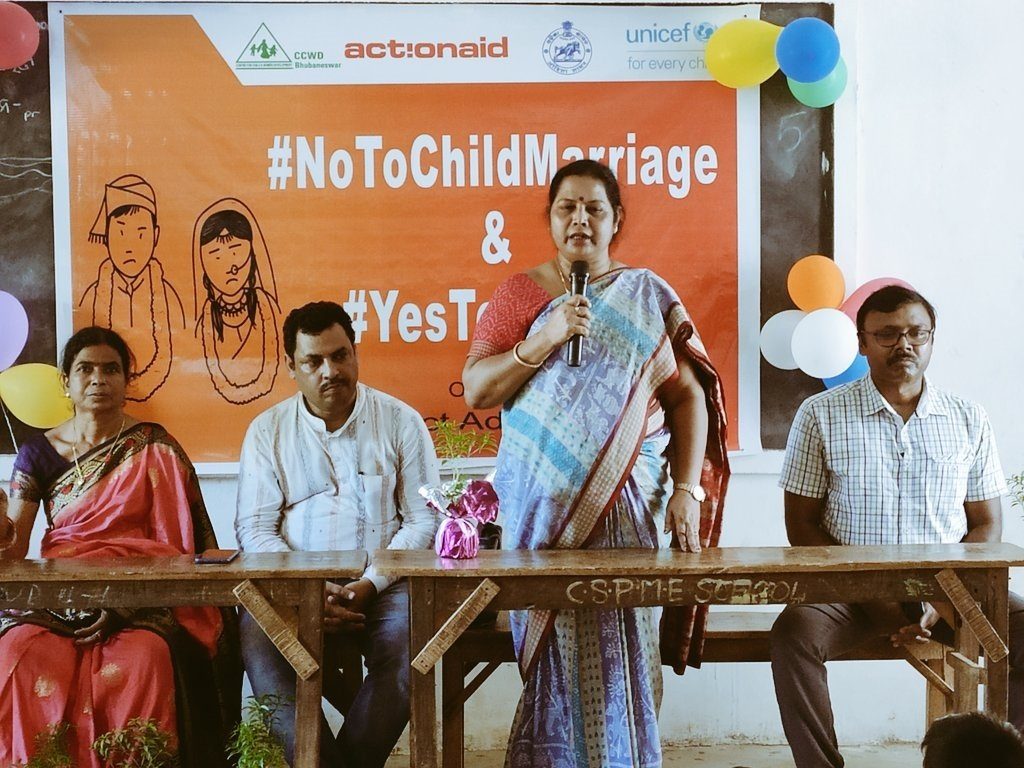 Awareness on the Campaign

Working on this issue over the past few decades ActionAid Association has been able to achieve significant advances.  As part of its efforts to sensitise tribal leaders on the issue of child marriage, we mobilised traditional forums of a few tribal communities to act on the issue. As a result, the traditional forums of six tribal groups of Odisha, (including the Paudi Bhuiyan in Sundergarh district, Soura in Ganjam district, and the Kondh, Gadaba and Paraja in Koraput districts), have all passed resolutions in their meetings to stop child marriages in their community.Similarly, the traditional leaders of Rajasthan have also been sensitized during the akkha teez, as a result of which more than 62 child marriages were stopped and/or postponed till they are older.Apart from this other important stakeholder like women’s self-help group members, students, teachers, priests, tent house owners, Panchyati Raj Institutions are being motivated to act against child marriage. In Kandhamal district of Odisha, Gram Sabhas were organised in all the 171 Gram Panchayats to discuss and resolve on various issues concerning children including child marriage.ActionAid Association is working with UNICEF to provide technical support to the district administrations of the districts most vulnerable to child marriage in the states of West Bengal (4 districts), Bihar (13 districts), Rajasthan (5 districts) and Odisha (6 districts). We have also been instrumental in the formation and strengthening of the District Level Task Force. In Bihar, the process has been expanded to Sub- Divisional and Block level task force. With a focus on increasing, convergence and coordination among the line departments support has been extended to these districts to develop District Action Plans to empower adolescents and end child marriage.With our constant engagement with the Women and Child Development Department of Government of Odisha, the state has come up with a Strategy Action Plan to end child marriage and has amended the Orissa Prohibition of Child Marriage Rules, 2009 to make it more effective.Individuals from different walks of life are now associating with us to work as volunteers to end child marriage. Today, more than 5,000 volunteers in the states of West Bengal, Bihar, Rajasthan and Odisha are actively engaged and building awareness on the impact of child marriage. With their efforts within this year, more than 300 child marriages were stopped and/or postponed. The girl children were rescued and rehabilitated by linking them with educational and vocational institutions.Adolescents have said NO to child marriage are also coming together to work as champions for the cause. Together they have formed a forum named “Balya Bibaha Pratirodh Manch”. They have been an inspiration for many. Some courageous young girls who have said NO to child marriage and are continuing their education were also recognised by the child rights commission and the state government. In Bihar alone, more than 1.30 lakh adolescent boys and girls have been reached out through group formation and school visits.However, the efforts against child marriage have a long way before fully succeeding. 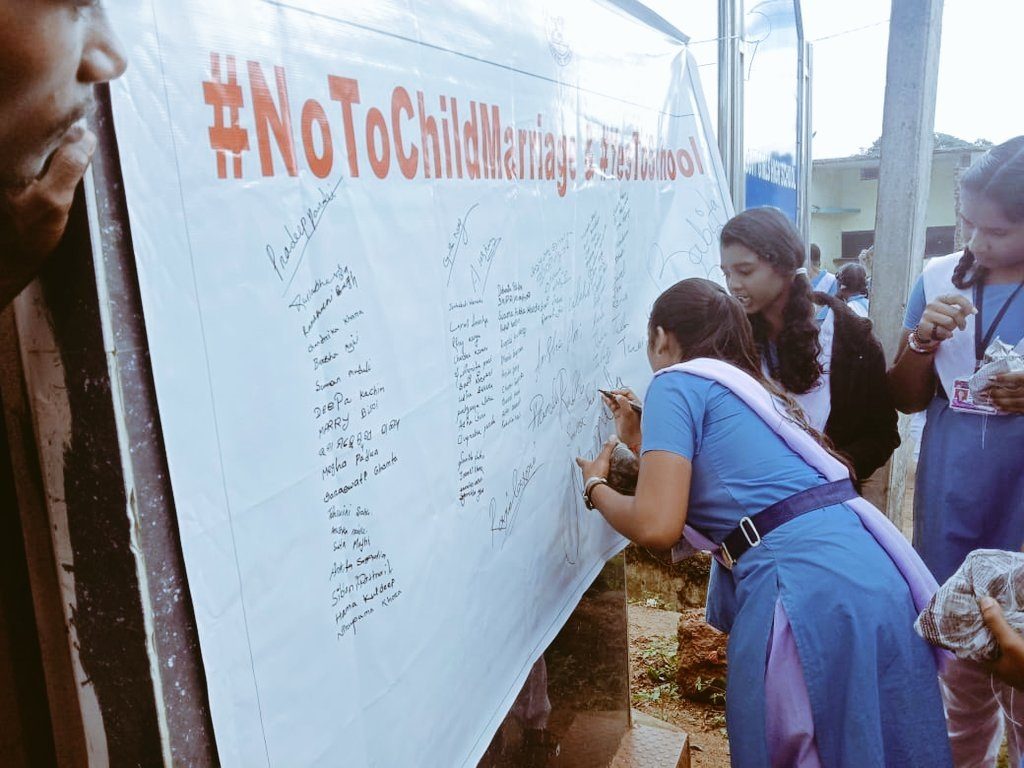 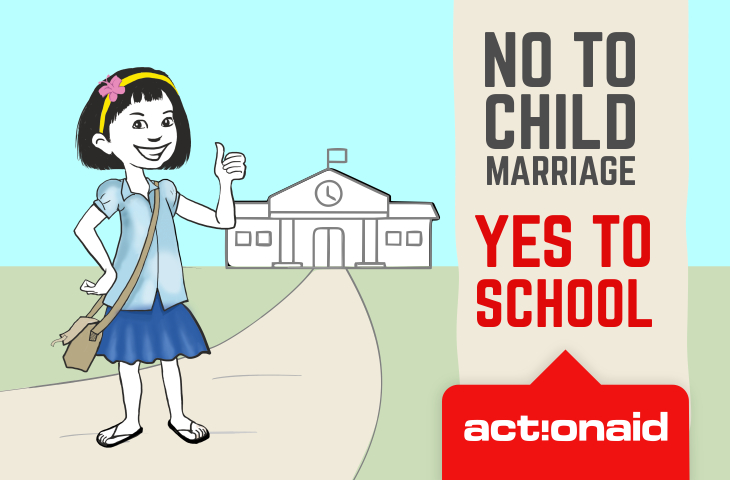