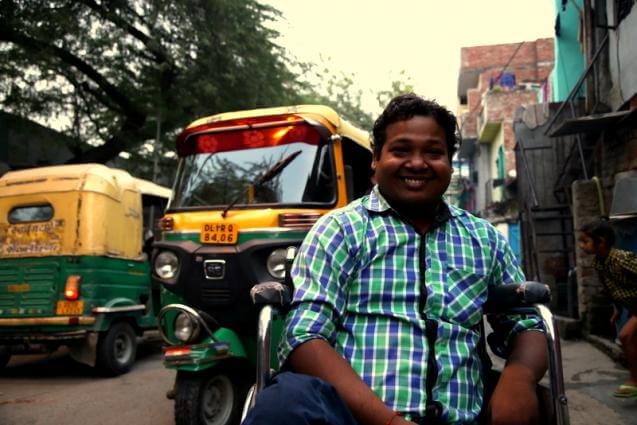 Sitting confidently on his tricycle and smiling, Rakesh says that he has now been associated with ArthAstha for 15 years. ArthAstha is an organisation formed in 1990 that provides information and resources for children and persons with disability, their families, communities and other stakeholders. ArthAstha promotes a rights-based approach by advocating for disability-related issues and demonstrating linkages to other developmental issues.

Rakesh gives full credit to his mother who came to know about ArthAstha and took him to the organization. Rakesh’s father felt overwhelmed by Rakesh’s disability. As a child Rakesh suffered from polio which affected his feet, and since then he walks on his knees. Rakesh’s father wanted him to stay at home and not go out. But Rakesh’s mother wanted her son to go to school, study well and be independent like other children. Though the family’s financial conditions are not enough to get Rakesh all the necessities, his mother refused to give up. For long Rakesh did not have a tricycle, his mother used to carry him to school and the other places. Even getting enrolled in school was not that easy for him. “When I was 5 my mother took me to school to get enrolled and the headmaster refused to give me admission. The headmaster said they had no time to take care of me so he could not permit the admission.”

Rakesh recalls coming to ArthAstha. “When I was a kid my mother once met Seema ma’am who was then working with ArthAstha. Ma’am convinced my mother to send me to them to learn. Thus I came here and became associated with the organization. I have learnt so many things here apart from studies.”

“After a year since my mother brought me to ArthAstha, we went to the school for the second time to get admission. This time Seema ma’am was there with us. Again the Headmaster said no. He told my mother that only if she agreed to be there in school with me the whole day would they admit me. My mother and I insisted that I could manage things on my own but he was not convinced. Then Seema ma’am intervened and because of her effort I finally got enrolled in school. But then school was too far from my house and my mother had to carry me on her back to school every day.”

Rakesh was happy to go to school but for him things were not easy and simple there also. He says, “When I started my school, the school building was not complete, it was under construction. So we had to go to the back of the building, where we used to sit and study in open. What was most difficult for me was that the place was far from the main gate, I did not have a tricycle then and I had to crawl. When I came to the third standard the building was completed, but my class was on the third floor. It was very difficult for me to go up and down the stairs. In standard six my class was on the ground floor and I had a tricycle so things became easy. Standard six to ten was fine, but then in the 11th standard we had computer classes and also we had to go to the lab for our practical classes. Our teacher said that I did not need to go to the lab and he would teach me on the ground floor itself. On the day of the exams when students were sent to the 4th floor, it was a big problem for me going there by stairs.”

After completing his school Rakesh joined computer classes as he wanted to do some vocational course, but he had to drop out in the middle. “The streets to the building where the computer classes were held were too narrow, and the classes were held on the 3rd floor. While going upstairs and coming down I even fell down twice or thrice, so I had to drop the class before completion,” Rakesh said. But he joined another computer class near his house and completed his course in two years. He was in a job for a while.

Rakesh said that ArthAstha taught him many things. He became aware of his rights and learnt to raise voice for them. Rakesh is now a senior member of Viklang Ekta Manch formed by ArthAstha. Speaking about the Manch Rakesh says, “The work initiated by ArthAstha in our community will now be continued by the Manch. ArthAstha has now made us strong and capable enough that we can raise voice for ourselves and also can help other people like us. If we need any help or support, we believe ArthAstha is always available there for us.”

Rakesh informed us that the Viklang Ekta Manch with ArthAstha recently established contacts with other NGOs working in the community and invited them in their programmes. Rakesh says, “they came and joined us and they liked our work and activities. They also invited us to participate in their programmes. Thus we shared our work, plans and ideas with each other and it was beneficial for all of us. We are planning to continue these activities in future where we will work together with other NGOs.”

ArthAstha, is an ally of Actionaid. “When ActionAid came in an association with ArthAstha,” Rakesh said, “we got a chance to go to different states outside Delhi. We got so much exposure. We got chance to meet people, learn new things, different ways of work. We got chance to meet other NGOs and participate in skill development workshops. We learnt how people work. From cooking to better use of solar energy we learnt many things.”

Rakesh shared the work-plan Viklang Ekta Manch was going to implement. Activities included the conducting of a survey between the communities, preparing reports on conditions faced by disabled people, organizing workshops to make people aware of the existence of disabled people and their needs. Rakesh says, “We are planning to start next month. We will organize a workshop and invite our MLA and councillor and we will apprise them about our problems and our needs. On the other hand we are in touch with local bodies in our community for the effort to make the community and the city accessible for people with disabilities. We are in touch of Delhi Government with our demands. We are also going to schools and colleges in Delhi and NCR to make the students and the people aware and sensible towards people like us.”