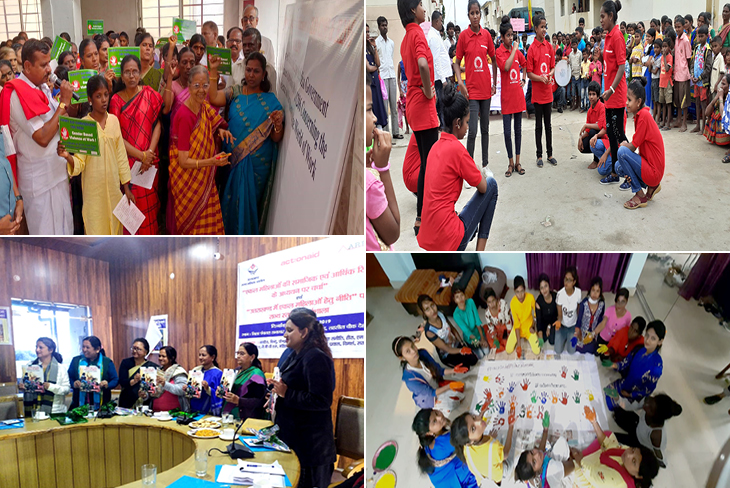 In India, according to the data released by NCRB, a total of 3,59,849 cases of crime were reported against women in 2017. Gender-based violence is a manifestation of patriarchy and historically unequal power relations between men and women. ActionAid Association has been working on the issue of violence against women and girls across its operational areas by ensuring safe spaces for them in communities and providing survivors of violence with relief and rehabilitation support.

The 16 Days of Activism against Gender-Based Violence is an annual international campaign that kicks off every year on the International Day for the Elimination of Violence against Women (November 25) and runs till Human Rights Day (December 10). Every year, during these 16 days, ActionAid Association, together with its allies and other groups, organizes campaigns across the country for prevention and elimination of gender-based violence. This year too, there were programmes and activities organized across several states.

In Madhya Pradesh programmes were organized in 120 police stations across 12 districts of the state in collaboration with Urja Helpdesk, a pilot initiative of Madhya Pradesh Police providing urgent relief support to women and children survivors of violence. We also partnered with Department of Women and Child Development, Government of Madhya Pradesh; Madhya Pradesh auto drivers’ union; Bhopal Chamber of Commerce; and civil society organizations to take forward the campaign on the ground. You would be pleased to learn that more than 800 meetings were held across 12 districts during this 16-day campaign, with nearly 47,000 people – men, women and children participating across all the events. The campaign focused on enhancing awareness on the violence faced by women and girls, among communities, in schools and colleges, in local panchayats, in police stations and among auto-rickshaw drivers. In addition, dialogues were held with public representatives highlighting the need for policy reforms to enable women and children resist patriarchal violence.

In Karnataka, several programmes were organized across Mysuru, Chamrajanagara, Mandya and Bengaluru districts. On November 27, community leaders and representatives of domestic workers, sanitation workers and garment workers from Mysuru, Chamrajanagara and Mandya, were given orientation on equal wages and legislations regarding sexual harassment and domestic violence. Subsequently, a meeting was organized in Chamrajanagara on December 9, demanding equal wages for women and effective implementation of the Sexual Harassment of Women at Workplace (Prevention, Prohibition and Redressal) Act. Representatives from Women and Child Development Department and Labour Department participated in the meeting. Our campaign in these three districts could reach out to nearly 5,000 families. In Bengaluru an awareness campaign around gender-based violence was organized in 11 slums from December 1 to December 8, reaching out to nearly 5,000 families. Young women, through street plays, slogans and pamphlets, sensitized people on the various laws pertaining to violence against women. The major issues highlighted in the campaign included effective implementation of the Sexual Harassment of Women at Workplace (Prevention, Prohibition and Redressal) Act and formation of Internal Complaints Committees in malls, hospitals, schools, colleges, hotels and offices with more than 10 employees. The need to display details of these committees at the respective establishments for public view was also stressed. The need to ensure safety and security for women and girls at public places through adequate streetlights and installation of CCTV cameras was also spoken about.

In Gujarat orientation sessions on gender-based violence were conducted across 23 schools and colleges in eight districts of the state.  Shaam-e-Satrangi – Poems for a better future, for a violence-free society, an event calling for the coming together of all efforts to end violence against women and girls was organized by us together with other groups in Ahmedabad. Furthermore, demands for a comprehensive policy for single women to address the stigma, discrimination and violence faced by them and to protect and promote their rights also grew stronger during 16 Days of Activism. A post-card campaign took place in eight districts, besides single women conventions were held in three districts,  along with meetings with public representatives seeking their support on these issues. Recognizing that lack of access to and ownership of resources is a major reason behind gender-based violence, we initiated the process of mapping women with no land and property in eight districts of the state and assessing the issues faced by them in receiving ownership of those resources. In addition, awareness programmes on Hindu Succession (Amendment) Act, 2005, and its various provisions were conducted in 30 villages across three districts. District Botad also saw a signature campaign taking place on women’s property rights.

In Tamil Nadu Ms. Balabharathi, the former MLA from Dindigul MLA, launched the 16-day campaign on November 24 in Madurai. The need to create harassment-free, violence-free and dignified workplaces for women workers was strongly articulated at this meeting that had nearly 250 women workers from the informal sector in attendance, including garment workers, sanitary workers and domestic workers. During the campaign several sensitization programmes were organized in the state on gender-based violence. On December 10, members of young women’s collectives from Semmencherry shared a list of issues pertaining to safety and security of women and children to Ms. Kannagi Packianathan, Chairperson, Tamil Nadu State Commission for Women; and Ms. Jayalakshmi, Deputy Commissioner of Police (Crime against children and women), Greater Chennai Corporation, urging them to take strong measures to end violence against women and girls.

In Uttar Pradesh, several programmes on women’s rights and gender-based violence were organized in Lucknow, Muzaffarnagar and Lalitpur. Community meetings were organized in seven slums of Lucknow in which women workers from the informal sector, including domestic workers and construction workers, participated and discussed issues such as sexual harassment of women at workplace and wages for women. They subsequently put together a charter of demands and also carried out signature campaigns around the same. In Muzaffarnagar, campaign activities were organized in 45 villages across Purkazi, Shahpur and Budhana blocks. Several orientation sessions for school students and adolescent girls were organized on gender, patriarchy, gender-based violence and importance of education. In Lalitpur, a day-long programme, comprising debate and poster competitions, was organized on December 10 in which representatives from several government departments were also present. Besides, there were sessions conducted for the capacity-building of district-level officials on women’s and children’s rights.

In Uttarakhand, a state-level consultation on the issues of single women and discussions on the formulation of a women’s policy for the state with special provisions for single women was organized in Dehradun on December 9, jointly with the State Women’s Commission. Nearly 120 people, including government officials, police department representatives and civil society representatives from eight districts of the state participated in this consultation. At the meeting, the Women’s Commission agreed on the need to formulate a women’s policy for the state of Uttarakhand and was of the view that the rich discussions on issues faced by single women at the consultation would help formulate provisions for single women.

In Odisha, several awareness generation programmes were held involving both women and men. Discussions with women farmers in Bargarh and Malkangiri districts were also facilitated on the various kinds of violence faced by them. The event organized on December 10 in Bhubaneswar to mark the culmination of the 16-day campaign saw people from diverse sections of society coming together and resolving to put an end to all forms of gender-based violence.

In West Bengal, a Youth Action Lab was organized for the leaders of young women’s collectives in Kolkata. During the programme, particpants discussed about the harassment and violence faced by women at workplace, at home and in public places. They also developed strategies to address several related issues through youth action. As part of their community-level action, these young leaders captured the experiences of 300 girls from within their communities on any incidents of sexual harassment or violence they might have faced. The study report will soon be prepared and shared with Hon’ble Minister, Women and Child Development Department, Government of West Bengal; and the West Bengal Commission for Women.

In Rajasthan mass awareness programmes and signature campaigns around gender-based violence were conducted across villages in Karauli, Tonk, Bharatpur and Jaipur districts. We also held consultations with district officials on the issue of violence against women and girls.

In Delhi in Madanpur Khadar young women and girls put together a charter of demands on issues pertaining to gender-based violence. A video on the issues young women faced related to public transport can be viewed here.