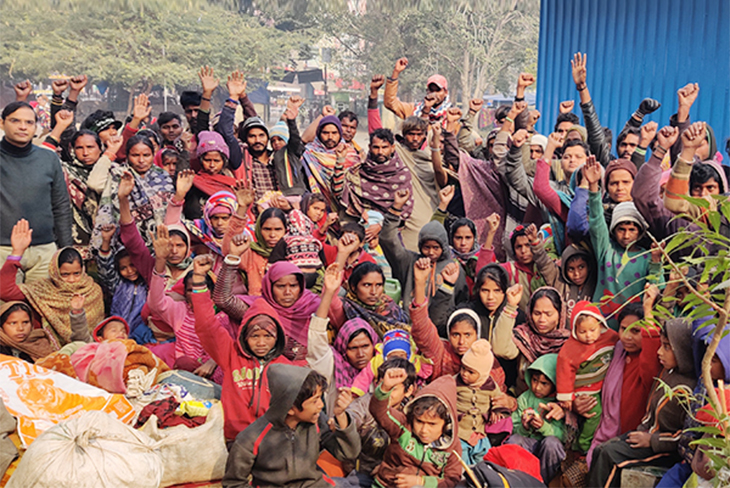 24 families from Chhattisgarh – making up 91 men, women and children – were rescued from brick kilns in two locations of Rajouri district of the Jammu region of Union Territory of Jammu & Kashmir in December 2019 and brought to Delhi. These rescued labourers are basically agricultural sector workers who, during the lean agriculture season, start working at brick kilns to earn their livelihood.

The rescue happened mainly because of the actions of Ajay, a 25-year-old who had, just in February 2019, been rescued as a bonded labourer from Himachal Pradesh. Not having received a proper rehabilitation package that was due to him, Ajay again got entangled in bonded labour through traffickers who took him to Rajouri on the promise of decent work. Ajay contacted activists from the National Campaign Committee for Eradication of Bonded Labour (NCCEBL) who had organized his rescue from Himachal Pradesh. While the rescue was being planned, Ajay managed to escape and come to Delhi with Raj Kumar, another bonded labourer in Rajouri. A rescue team was formed with volunteers from Raigarh, Chhattisgarh, activists from NCCEBL, Human Rights Law Network (HRLN) and ActionAid Association, and the two escaped bonded labourers, Ajay and Raj Kumar. Based on letters sent by the National Human Rights Commission (NHRC) and NCCEBL, the office of District Magistrate, Rajouri, constituted an enquiry commission under Assistant Commissioner, Revenue (ADM), Rajouri. Through two raids on December 26 and 27, the bonded labourers were rescued from the employment of CBK Brick Kiln in village Dhangri and BBK Brick Kiln in village Sasalkote of Rajouri tehsil.

With barely enough to survive, the rescued bonded labourers reached Delhi on the night of December 29. They continued to stay in Delhi for the next few days, demanding that release certificates be issued to them, essential for them to claim the rehabilitation benefits they are due as rescued bonded labourers. On January 8, officials from the Labour Department of Government of Chhattisgarh reached Delhi and took the labourers back to their state, Chhattisgarh, on January 10. There needs to be proper implementation of the standard operating procedures of rescuing bonded labourers to ensure that they are given the due rehabilitation package so they do not get sucked back into bonded labour and inhuman exploitation and oppression.

“We had a very difficult life there,” recalls Bhubaneswari Kumari Khute (27), further adding, “We were made to work for 14-15 hours every day under dismal conditions. Our housing conditions were no less miserable. Each time we used to ask our employers for pay, we were abused and told that we have been sold off to them.” Now that they have been rescued, Bhubaneswari states, “We want our rights and we want the government to support us. We demand that we be paid every single paise for all the work we have done, at the rate of Rs. 600 a day. We want to educate our children so they don’t have to suffer the way we did.” Click here to read more about this rescue.

In the month of August 2019, ActionAid Association had worked for the rescue of 17 bonded labourers from a jaggery factory in Pune, Maharashtra. Hailing from Uttar Pradesh, these labourers were found living in a deplorable state and working under extremely exploitative conditions. All 17 rescued labourers subsequently received release certificates and were safely repatriated to their native places.