A Study of Women Farmers under Kudumbashree Collective Farming Released 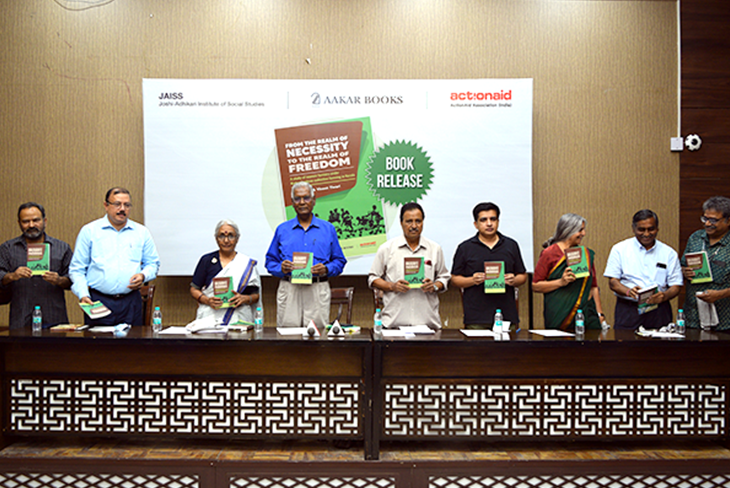 Kudumbashree, a Malayalam word, translates to ‘prosperity of the family’. As a programme to eradicate poverty and promote the socio-economic empowerment of women, the Kudumbashree Mission has been active in Kerala since 1997. On August 22, 2022, ‘From the Realm of Necessity to the Realm of Freedom: A Study of Women Farmers Under Kudumbashree Collective Farming in Kerala, authored by Dr Jaya Mehta and Vineet Tiwari from Joshi-Adhikari Institute of Social Studies (JAISS), and published by JAISS, Aakar Books and ActionAid Association, was launched in Delhi. The book’s relevance goes far beyond the state of Kerala, which has many particularities. The achievements, the virtuosity and the potential of women working on land in a land-scarce corner of India beckon the rural community of India.

Speaking at the book launch, T.K. Jose, IAS (Retd.), the former Executive Director of Kudumbashree, elaborated on the early history of the Kudumbashree movement and collective farming and the innovations used in the programme. He also expressed his admiration for the work done by the women in this mission. Calling the book a guide for social transformation, D. Raja, General Secretary, Communist Party of India, stated that in times of food insecurity, rising inflation and exploitation of agricultural workers, this book presents itself as a powerful account of alternative agricultural practices that empower workers. Aruna Roy, Founder of Mazdoor Kisan Shakti Sangathan, also lauded the book, specifically for presenting insights on how to bring about agrarian transformation and detailing the materialisation of the otherwise vague concept of women’s empowerment.

Prof. Ajay Patnaik, Director, JAISS, who was chairing the meeting, spoke about the need for research, like what lay behind this book, to build forceful arguments on the change we need in our country. Addressing the gathering, Tanveer Kazi, Associate Director of ActionAid Association, said, “The greatest message of hope that this book presents is the possibilities of people from varied backgrounds to come together in collectives and work not just for themselves but also to serve others”. He also talked about how ActionAid Association actively promotes the model of cooperatives and other forms of collective enterprise to support and empower marginalised communities.

Thanking the speakers, co-author Jaya Mehta said that this book acknowledges the change that small and marginal farmers can bring about and called to the grassroots communities to demand their rightful entitlements.