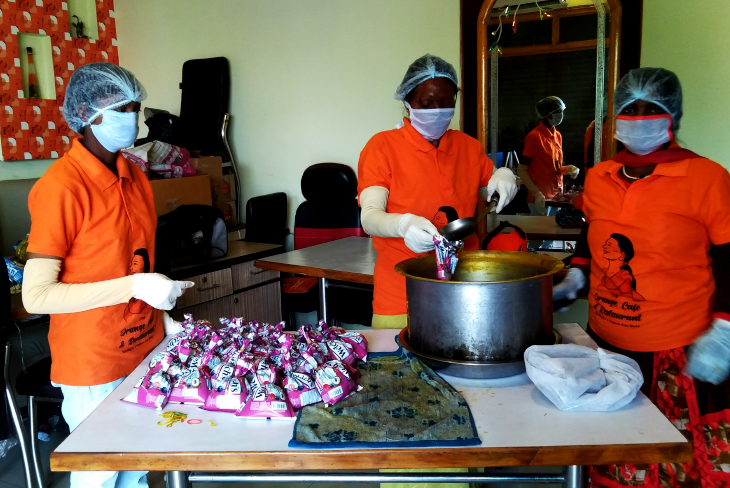 In February 2020, a group of acid attack survivors from Uttar Pradesh, started ‘The Orange Café and Restaurant’ in Varanasi, built on the theme, ‘Standing for a violence-free world’. While the café is owned, run and managed by women survivors of patriarchal violence, it has been set up though the collaborative efforts of the  Red Brigade Trust, a grassroots- based civil society organisation, the Care Today Fund, set up by the India Today Group to help people affected by tragedies and ActionAid Association.

Within a month of the café’s inauguration, the outbreak of COVID-19 occurred across the country and the lockdown to contain its spread. The threat of the spread of infection and the necessary lockdown has led to socio-economic crises, which like all emergency situations disproportionately affects people and communities already living in vulnerability and exclusion. These are the daily wagers and low income households, who depend on the informal sector whose income stopped with the lock down, and have little or no access to government provision and no savings to fall upon. Amid the unfolding COVID-19 pandemic, the acid attack survivors running the Orange Café decided to continue serving food, not to paying customers but to support the most vulnerable communities living in the city.

Starting March 30, these brave women have been preparing 200 food packets every day for those most marginalized. With generous support from volunteers and locals in the city, till May 5, they have distributed 6,800 food packets among daily wage earners, migrant labourers, rickshaw-pullers, single women, and the old aged and differently abled people. As part of this initiative, they have been able to cover 14 areas of Varanasi, namely, Saket Nagar basti, Nawabganj, near Assi Nallaha, Kabir Nagar, Maalihaan, Kiwalyadham Colony, homeless shelter home of Manihaari Tola, Ghasiyari Tola, Sukulpura, Khojanwan, Manasnagar, Sigra, Ravinderpuri and Gurudham.

Energized by the committed efforts of these women, Red Brigade and the police administration of Durgakund have also come forward to support in distribution of the food packets. “We have faced many difficulties and hardships in our life after the incident of acid attack, but today I am happy and satisfied to do something for the most vulnerable sections of the society in this hour of need,” says Badama Devi, one of these brave survivors.

“The distribution of cooked food packets had continued even in curfew situation with the support of Police Officials of Durga Kund. They went with us for distribution,” said Ajay Patel from Red Brigade. “We are following guidelines and protocol, and are being careful about maintaning social distancing at the time of distribution of food packets,” he added.

“We appreciate the hard work of these acid attack survivors; and salute them for their tireless effort in this crisis. There are many informal workers, daily wage earners and rikshaw pullers who are facing food crisis due to the lock down. We are providing cooked food to them with the support of ‘The Orange Café,” said Mr Uday Pratap Singh, Station Officer, Bhelupur Police Station.

Khalid Chaudhry, Associate Director, ActionAid Association also appreciated the dedication of the survivors. “Survivors are doing their work with great commitment; it is inspiring for all of us,” he said. He also shared that ActionAid Association is reaching out to most deprived sections of the society such as musahars, sahariya, vantangia, migrant workers, and single women in the remote areas of Uttar Pradesh and providing them dry ration, cooked food, sanitation kits and medical support. Apart from this, the organization is actively involved with various government departments and is supporting local communities in accessing the government schemes and entitlements announced by the state and central government.

Among the people reached out is Savita, a daily wage earner living in Manas Nagar of Varanasi, who has been unable to procure work due to the implementation of the lockdown. She said that the support that she’s received from The Orange Café has helped her and other distressed people like her. “We are getting good quality of cooked food on regular basis and do not sleep in an empty stomach,” she said.