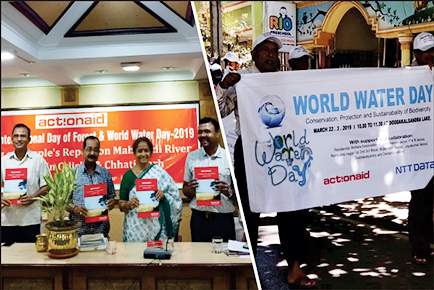 In order to understand river water governance of River Mahanadi through people’s perspectives on the same, ActionAid Association and its allies had undertaken a study in Odisha and Chhattisgarh, covering 40 villages from 12 districts of both the states, to understand the various issues, people’s concerns and the expectations of the riverine communities. Besides, the study gathered several case stories from the field reflecting the vulnerabilities of these communities.

‘People’s Report on Mahanadi’, the report emerging out of this study, was released at a programme organized in Bhubaneswar, Odisha, on March 18. This state-level programme was attended by more than 60 community representatives, including women leaders and youth volunteers, environmentalists, lawyers and civil society representatives, who immensely contributed to the discussions at the meeting with their views and ideas on issues related to Mahanadi. On the occasion, several youths also signed up to become Jal Sathis (Water Volunteers) and collectively resolved to continue deepening the discourse on water ecology, forests and the larger environment at the grassroots through regular community dialogues. On the occasion of World Water Day (March 22), we took up water literacy programmes with the Water Volunteers on the banks of River Yamuna.

We are also happy to share that on the eve of World Water Day, our Karnataka Regional Office, with support from NTT Data Services, facilitated sessions for nearly 140 students from four schools in Bengaluru on the theme of water conservation and other related issues in order to raise their water consciousness. Furthermore, with support from the local Resident Welfare Associations, an Awareness Jaatha was organized near Doddakallasandra lake in Bengaluru on the morning of March 22. Through this initiative, the local residents were sensitized on the need for conservation of water, and the protection and sustainability of bio-diversity. Covering a stretch of 3 kilometres, this jaatha was followed by an awareness meeting at the lake that saw active participation of college students, environmentalists and ornithologists.

Besides, on the occasion, a consultation on drought management and sustainable water conservation was organized in Sayyadpur village of District Aurangabad, Maharashtra. Attended by community members from four villages of the district, the meeting also saw active participation of government officials from the Department of Agriculture and the representatives from Panchayat Samiti and Gram Panchayats.

ActionAid Association is committed towards advocating for water security for all and protecting the commons.