#ActWithHer: Furthering the rights of women 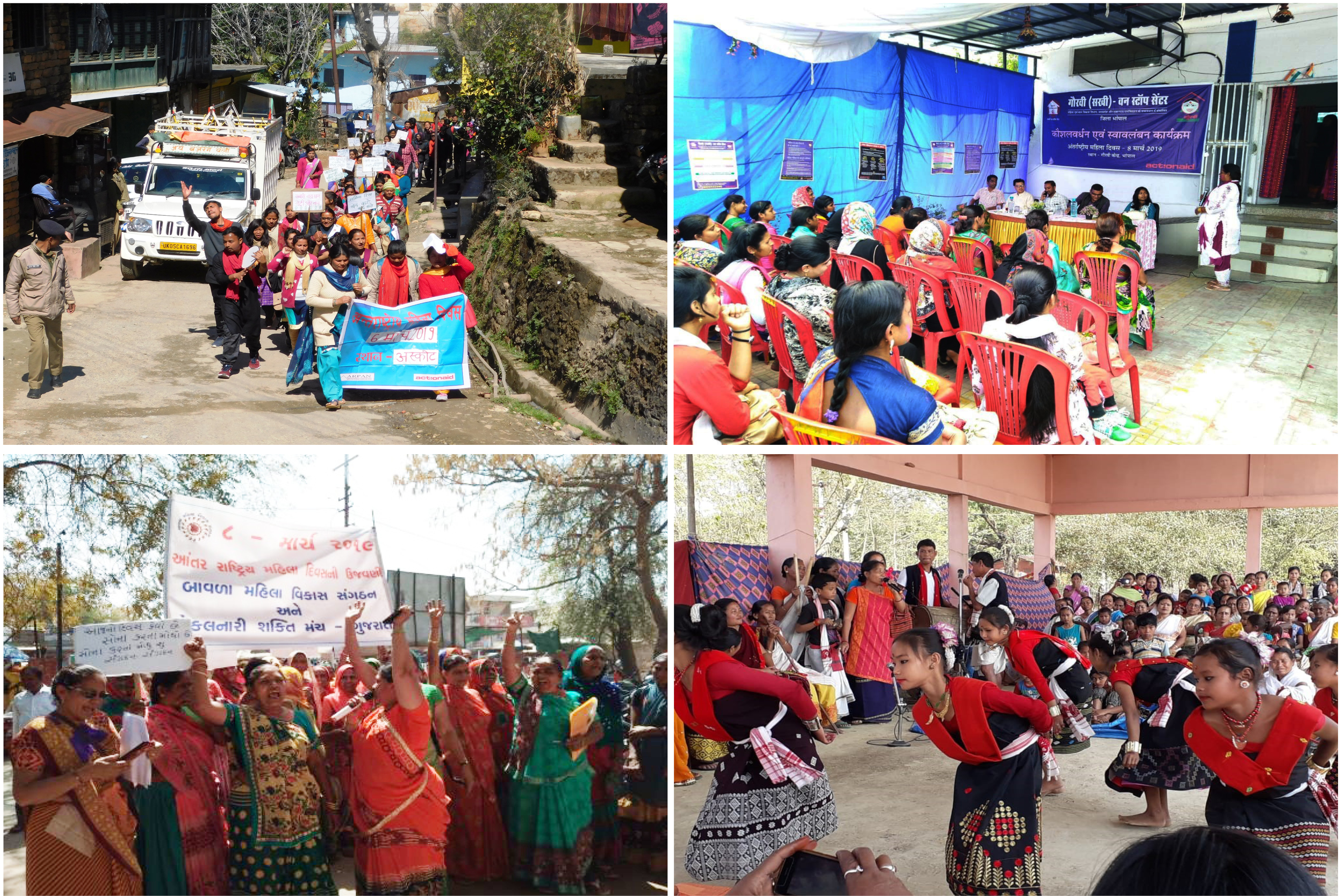 On the occasion of International Women’s Day (March 8), ActionAid Association launched #YourWorkMyWork, a social media campaign to celebrate women in the world of work. The campaign called on women to share video selfies of them and their work on social media with the hashtag, #YourWorkMyWork. These conversations were aimed towards helping raise the visibility of women in the various spheres of work and capturing the issues that women would like to raise. We are glad to share that this initiative saw a good participation of women from the various communities; several women came out and shared their concerns and issues on social media.

Besides, International Women’s Day was also celebrated within the communities across the various states we work in.

In Madhya Pradesh, International Women’s Day was celebrated across 20 districts of the state with active participation of a total of nearly 1,700 women and men. Besides, Gauravi, the One-Stop Crisis Centre, facilitated an interface of nearly 200 women survivors of violence with government representatives and helped them get linked to the various skill-development programmes for their economic empowerment.

Association for Advocacy and Legal Initiatives (AALI) organized a panel discussion and a meeting with the media on the issue of women workers’ rights in Lucknow, Uttar Pradesh. The panel discussed in detail the implementation of Sexual Harassment of Women at Workplace (Prevention, Prohibition and Redressal) Act, 2013, ensuring a decent working environment for women and girls, the provision of shelters for migrant working women, minimum wages and fixed working hours for domestic workers. A colleague from our Uttar Pradesh Regional Office participated in the meeting as a panellist.

Pithoragarh district in Uttarakhand saw nearly 300 Dalit and tribal women and men from 12 villages coming together on International Women’s Day and discussing the various issues affecting women, including those they face at their work-sites. Through an awareness rally and a nukkad natak, issues pertaining to women’s ownership over land, child marriage, violence against women and girls, and the taboos associated with menstruation were discussed.

A Mahila Melawa was organized at a school in Sangola block of Solapur, Maharashtra. During the programme, an essay competition on the topic, Gharache Kaam Sarvanche (household work is everyone’s responsibility), was conducted. Several games were also organized to help children understand the concept of gender equality. In Kallam in Osmanabad, Maharashtra, a meeting of ‘single women’ was organized on the occasion, and their issues and concerns discussed.

In Gujarat too, the issues related to ‘single women’s’ social security, land and property rights, unpaid work and the issues of women farmers were comprehensively discussed at the programmes organized by Ekal Nari Shakti Manch and our other allies in five districts of the state, namely Ahmedabad, Botad, Kutch, Navsari and Tapi.

International Women’s Day was also celebrated in the states of Assam and Nagaland. In Assam, The East and ActionAid Association, together with Milan Jyoti Nari Manch (MJNM) in Morigaon district and with Jagriti Nari Manch (JNM) in Sonitpur district, organized special programmes on the occasion. Issues such as rape, domestic violence, witch-hunting, school drop-outs, early marriages, trafficking and alcoholism were discussed in detail at these meetings. A total of over 220 people participated in these programmes. In Nagaland too, a special programme was organized, together with Sisterhood Network and Bade Women Society (BWS) of Peren district, where more than 60 people participated. The women present at the meeting also participated in a drawing session to express their ideas of “freedom” through drawings.

In Punjab, an event on the occasion of International Women’s Day was organized in Mansa district. Nearly 125 women participated in the programme; they talked in detail about the lack of employment opportunities for rural women, lower wages and incidents of women’s harassment. The concerned officials present at the meeting oriented these women on their various legal rights, including The Sexual Harassment of Women at Workplace (Prevention, Prohibition and Redressal) Act, 2013.

An event on this occasion was also organized in Chamba district of Himachal Pradesh. More than 90 women belonging to the Scheduled Castes and Scheduled Tribes from 18 villages, including several government representatives, participated in the programme. The women present at the meeting were informed about the various Central as well as state-level women-specific schemes. They were also oriented on the importance of girls’ education, and on the need to end child marriage and other social evils. A health camp was also organized on the occasion; more than 50 women accessed the camp and received free medical check-up and medicines. Furthermore, amid local songs and dance performances, women from the district who had done excellent work towards community development were felicitated during the programme.