Advancing the Rights of the Invisible, Unorganised Choultry Workers 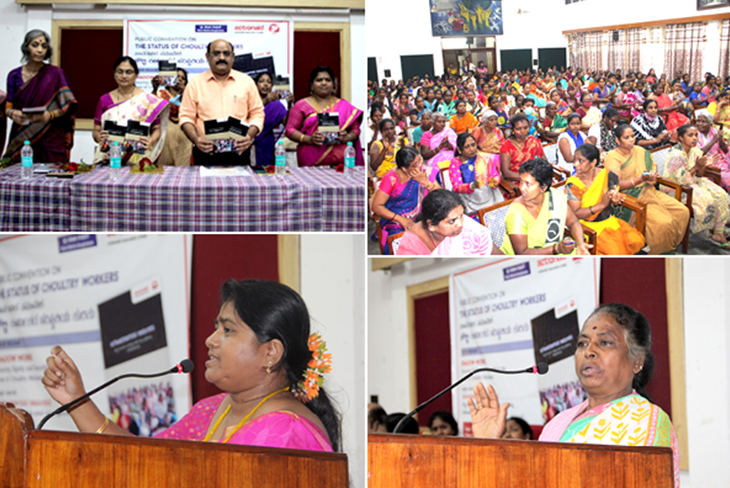 Together with Slum Mahila Sanghatane, ActionAid Association recently conducted a study on the status of choultry workers. We published ‘Shadow Work: Ensuring Dignity and Security in the Lives of Choultry Workers’ as a report of that study. Choultry workers, who are largely women, do the cleaning and sometimes assist in cooking in “choultries” or marriage halls for events such as weddings, birthdays, death ceremonies, mass feeding and other religious and social functions. Drawn from communities living in poverty and exclusion, these workers are hugely susceptible to gender, class and caste discrimination and exploitation.
Presenting the diverse challenges faced by women choultry workers in and around Bengaluru, Karnataka, and the way forward, Shadow Work was launched at a public convention attended by nearly 280 choultry workers on October 11, 2022. We released the report in the presence of Dr S. B. Ravikumar, Joint Secretary and Joint Labour Commissioner, Karnataka State Unorganised Workers Social Security Board; Ms Pramila Naidu R., Chairperson, Karnataka State Commission for Women; Ms Geetha Patil, Joint Director, Women and Child Development Department, Government of Karnataka; and Dr Shivaram, Secretary, Karnataka State Commission for Scheduled Castes and Scheduled Tribes.
Choultry workers narrated stories of their varied struggles; they shared about the low wages they receive after long hours of work, unsafe work conditions, insecure work environment and lack of social security and dignity. They also spoke about the stigma they face at familial and societal levels. Expressing solidarity with choultry workers, the dignitaries at the meeting elaborated on the various government schemes relevant to this sector of workers and assured them of full support from their respective offices to protect their rights.
During the programme, Ms Madhu Bhushan, a feminist activist who helped to bring the report together, shared the study’s recommendations towards ensuring the basic rights of choultry workers and restoring their dignity of labour. Read the publication here. We remain committed to promoting the rights of these vulnerable, often invisible workers.