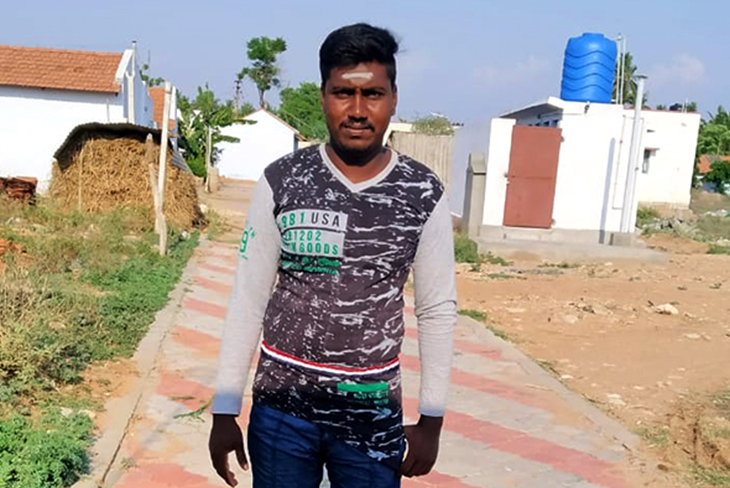 “I had never even dreamt of leading a free life. I can now go out to work and spend more time with my family,” says Thirumurthy, 23, from Kunjipalayam village in Coimbatore, Tamil Nadu. When Thirumurthy was just six, his family had moved to Coimbatore to work as daily wage agricultural labourers at the farms in Pollachi taluk. However, when his mother fell ill, the family had to take an advance of Rs. 1,000 from a coconut farm owner. And upon taking this advance, the family was made to join as agricultural workers in the said owner’s mill to repay the debt.

From a very young age, Thirumurthy used to go with his parents to work in the mill and soon was made to operate the mill machinery too. While working at the mill, Thirumurthy took an advance of Rs. 25,000. The mill owner would deduct some amount from his weekly earnings towards the repayment of the debt. Besides, the mill owner would impose fines if Thirumurthy was late to work by even a few minutes. If there was any damage caused to the mill machinery, that cost too was recovered from Thirumurthy’s daily wages. After getting married, Thirumurthy’s wife also started accompanying him to work in the mill, and the owner deducted an amount from her wages too.

One day, the mill owner asked Thirumurthy to sign on a blank paper threatening him, saying that if he left the mill, his father and brother would have to repay Rs. 1,15,000 along with interest and fine. When his father inquired about the details of the loan amount remaining to be repaid, the owner beat Thirumurthy’s father, verbally abusing him using his caste name. The mill owner also made the father sign a blank stamp paper, asking him to either pay Rs. 1,75,000 or work for another two years in the mill.

During community engagement processes in the area, ActionAid Association’s team learnt about the case. We encouraged and supported Thirumurthy to come forward. A written complaint was filed with the concerned government authorities. As a result, an enquiry was conducted, and Thirumurthy was rescued along with other bonded labourers from the area. ActionAid Association now continues to support him and his family in finding alternative livelihood options and for their further rehabilitation. “I will always be grateful to ActionAid Association for rescuing me. I will also help other bonded labourers who are in the same situation as me to get out of this oppressive system,” says a relieved Thirumurthy with a smile on his face.

Thirumurthy’s rescue was part of the initiative. ‘Freedom from Forced Labour and Modern Slavery: Promotion of Dignity, Rights and Empowerment of Bonded and Potential Bonded Labourers in the Agriculture Sector’. This three-year programme started in June 2019, with support from the European Commission. ActionAid Association has been running the programme across six states — Gujarat, Karnataka, Madhya Pradesh, Punjab, Tamil Nadu and Uttar Pradesh. The objective is to protect and promote the human rights of forced and bonded labourers in the agriculture sector. Together with communities and local administrations, we work towards the identification, rescue and rehabilitation of people working in bondage. We also work to ensure that the labourers at risk of becoming bonded are not trapped within this exploitative cycle. We sensitize vulnerable communities on the various related legal aspects, rights and mechanisms, and link them to government schemes. Since the roll-out of this programme, we have been able to mobilize around 15,000 workers and rescue nearly 500 bonded labourers from across the six intervention states.