Campaign against debt bondage in Punjab 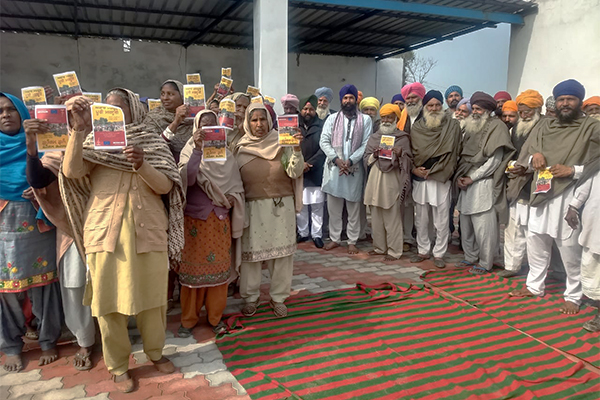 Punjab is the food bowl of India; it contributes 60% wheat and 40% rice to the central pool. Yet, there are a large number of agricultural labourers in the state who work as bonded labourers, and agrarian distress is forcing entire families, including children, into debt bondage. From January 15 to February 15, ActionAid Association and Dalit Dasta Virodhi Andolan (DDVA), with support from the European Commission, campaigned against bonded labour in Punjab. The campaign, ‘Azad Mazdoor, Puri Mazdoori’ (Free labour, Full wages), travelled more than 2,000 kilometres, reaching out to about 5,000 bonded labourers and workers-at-risk across 117 villages in four blocks of Jalandhar, Amritsar and Tarn Taran districts.

The drive went village to village, sensitizing communities on minimum wages, decent work conditions, safe passage for migration, and spreading awareness about the legal provisions to address exploitative and hazardous work conditions. The campaign also spread awareness on welfare schemes run by the government and the provisions of important laws. We focused on the Bonded Labour System (Abolition) Act, The Building and Other Construction Workers (Regulation of Employment and Conditions of Service) Act and the Mahatma Gandhi National Rural Employment Guarantee Act (MGNREGA). In the course of the campaign, we were able to rescue 54 bonded labourers from a construction site in Tarn Taran. We also identified 458 bonded labourers and workers-at-risk, and we informed the concerned authorities for their rescue and rehabilitation.

We submitted a memorandum to the Government of Punjab through the district administrations, highlighting major issues needing immediate attention. Foremost was the need to conduct a comprehensive survey to identify and rescue all bonded labourers. Also, police personnel in the state need training and orientation on the issue of bonded labour. The memorandum called for organizing special Gram Sabhas (Village Councils) on MGNREGA, Rozgar Diwas (Employment Day) in villages on a monthly basis for workers to register and demand work under MGNREGA, and the setting up of administrative penalties for late payment or non-payment of wages to MGNREGA workers. Equal and decent wages for women agricultural labourers was also pressed for.