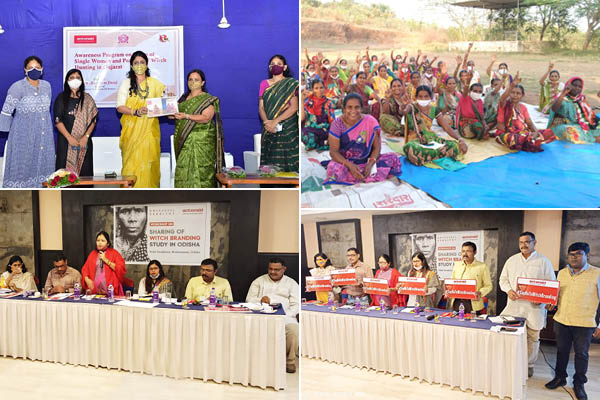 Witch-hunting, a social practice whereby a woman is persecuted and harassed mentally, psychologically and physically, and in many cases, in the most heinous ways, is widely prevalent in several states of India. ActionAid Association has been working with single women for over two decades now, facilitating rights, entitlements and a life of dignity for them. As part of our interventions towards organizing and empowering them, we have also been examining and addressing their vulnerabilities to the practice of witch-hunting.

Ms. Rajulben Desai, Member, National Commission for Women (NCW), recently visited Navsari and Tapi districts of Gujarat along with our regional team and interacted with single women and those subjected to witch-branding. On January 12, 68 single women from six villages of Khergam block, Navsari, had a meeting with Ms. Desai and apprised her of the problems faced by them in accessing inheritance rights and other entitlements. On January 13, a similar meeting was organized in Tapi wherein 260 single women participated. At the programme, a representative from Centre for Social Justice presented a detailed update on the practice of witch-branding in South Gujarat. He also talked about the various related social and legal mechanisms to address this atrocious practice being considerably weak and ineffective. Single women openly shared about the stigma and violence faced by them because of the label of “witch” attached to them. They also spoke about the challenges they encounter in getting inheritance rights and the various government entitlements, including widow pension, ration, housing and job card.

In Odisha, together with the University of Kassel, we recently carried out a study on witch-hunting in three high-prevalence districts, namely Ganjam, Mayurbhanj and Keonjhar. As part of this exercise, we collected case stories from within the communities and facilitated community discussions, interviewing those concerned. In this context, we organized a workshop in Bhubaneswar on January 27 to share the findings emerging from this study. Dr. Minati Behera, Chairperson, Odisha State Commission for Women (OSCW), was also present at this meeting that saw active participation of women leaders from the three aforementioned districts. Our study reveals that women owning land, especially those single and/or elderly are the most vulnerable, with perpetrators grabbing their land and other resources under the cover of “witch-branding”. Even the health-related issues in families/communities are blamed on them.  As a result, these women and their children face a lot of stigma, ostracization and indignity, including threats to their life. The study recommends awareness drives against witch-hunting in the high-prevalence locations, including sensitizing police personnel and frontline workers on related laws. It also stresses on the need to engage with traditional leaders, women’s groups and Panchayati Raj Institution members; and to promote scientific temper among communities. Strengthening social and legal mechanisms to prevent and address cases of witch-hunting, and to ensure due justice for survivors is another major recommendation emerging from this study. A similar study is now planned in nine more high-prevalence districts of the state together with OSCW.

In collaboration with the University of Kassel, we also conducted a study on witch-branding in Assam, Jharkhand, Madhya Pradesh and Meghalaya. During this study, we also interviewed several women branded as “witches” and documented their experiences. The detailed report emerging from this study and the case stories gathered would soon be released.