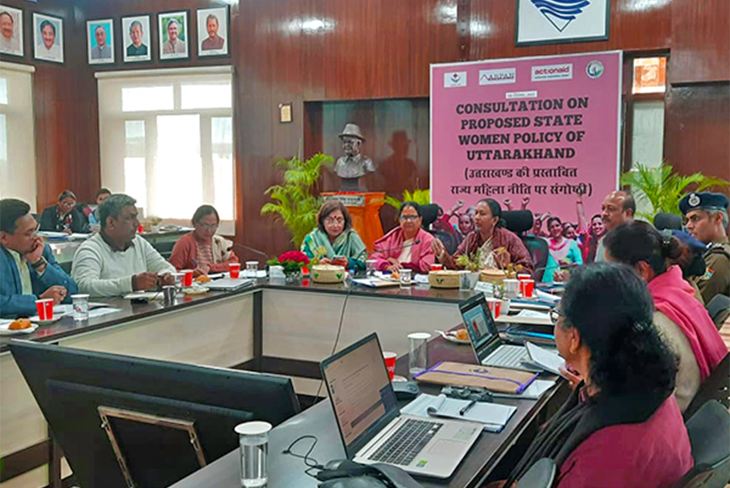 On December 8, 2022, ActionAid Association organised a state-level consultation on Uttarakhand State Women Policy in Dehradun, together with Uttarakhand State Commission for Women (UKSCW). Ms Kusum Kandwal, Chairperson, and Ms Kamini Gupta, Member-Secretary, UKSCW; Dr Geeta Khanna, Chairperson, State Commission for Protection of Child Rights, Uttarakhand; Ms Radha Raturi, Additional Chief Secretary, Government of Uttarakhand; and Mr H.C. Semwal, Secretary, Department of Women Empowerment & Child Development, Government of Uttarakhand, were present on the occasion, along with representatives from other government departments and District Magistrates of all 13 districts of the state.
The formulation of the Uttarakhand State Women Policy was initiated in 2020 in collaboration with UKSCW. The first draft of the same was presented during a meeting held virtually on October 8, 2022, attended by representatives from 13 State Government departments. Subsequently, a five-member committee was constituted under the leadership of the Chairperson, UKSCW, to incorporate the suggestions received on the draft and to share the revised draft with all concerned government officials for finalisation. The state-level consultation in December was part of this process.
Together with Ms Renu Thakur from Association for Rural Planning and Action (ARPAN), Khalid Chaudhry and Maneesha Bhatia of ActionAid Association presented the key features of the State Women Policy draft. They shared how the demand for this policy emerged from women’s groups at the grassroots, many with whom ActionAid Association is engaged. The recommendations made through the draft policy to promote women’s political participation and socio-economic empowerment were also elaborated. The areas covered in the draft include women and girls’ education, health and nutrition, food security, economic participation, property rights, political representation and decision-making, safety and protection from violence, and the impact of climate change and emergencies on women. The draft policy also has a specific chapter on single women in Uttarakhand, the issues they face and the measures that would enable their inclusion and empowerment.
Following the presentation, Chairperson, UKSCW, announced that the Commission would upload the draft policy on its website to invite comments and suggestions on the same from the public. She also shared that the Commission would then submit the draft policy to the Honourable Chief Minister’s Office, urging for the Uttarakhand State Women Policy to be announced on International Women’s Day, i.e., March 8, 2023.