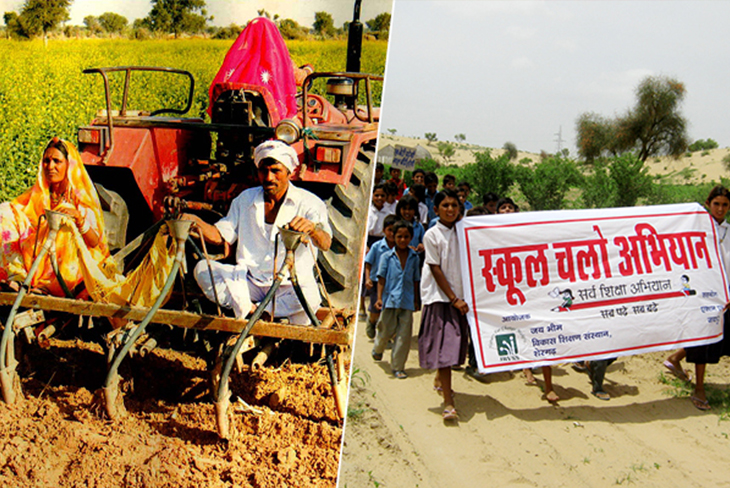 Recognizing the need to address discrimination, oppression and violence faced by Dalits in Rajasthan, the Dalit Adhikar Network (DAN) was formed in the state in 2007, covering the districts of Ajmer, Jodhpur, Udaipur, Jaipur, Bharatpur, Jhalawar and Chittorgarh. Set up with support from ActionAid Association, other civil society organizations and Dalit rights activists, this network has been working towards bringing the Dalit communities together and ensuring that they are able to access rights and entitlements. In 2010, DAN and ActionAid Association started working together under a longer-term programme for the development and empowerment of Dalit communities living in Shergarh block of Jodhpur district. As part of this initiative, we have been supporting communities across 45 villages of this block to access rights to land, social security schemes, education, child rights and women’s rights – all with an aim to ensure they can a have a life of dignity and respect. We have also been working in eight other blocks of Jodhpur district on the issues faced by women from Dalit communities.

Over the years, we have been able to support more than 8,200 Dalit families in Shergarh block to claim land rights. 156 Dalit families have also received homestead land. Nearly 13,500 families belonging to Dalit communities have been linked to food security schemes and more than 3,800 people to social security schemes. As part of our interventions to ensure that children are able to access quality education, 910 dropped-out children have been enrolled back into school, and more than 1,200 children have been freshly enrolled. The efforts of community leaders have also helped facilitate discrimination-free mid-day meals in 44 schools of Shergarh.

The initiative also helped resolve 240 cases of atrocities against Dalits, including several cases of atrocities against Dalit women across the seven districts. As a result of this initiative, more than 1,000 community-based cadres have stepped forward and are now actively facilitating access to justice for community members, including in cases of atrocities and land encroachment. DAN and ActionAid Association, together with community-based organizations, are also running a campaign on Dalit rights across these districts. Besides generating awareness among communities, the campaign is working towards their mobilization, leadership development and access to justice and the various schemes and entitlements.