Decent work for women dependent on the informal economy 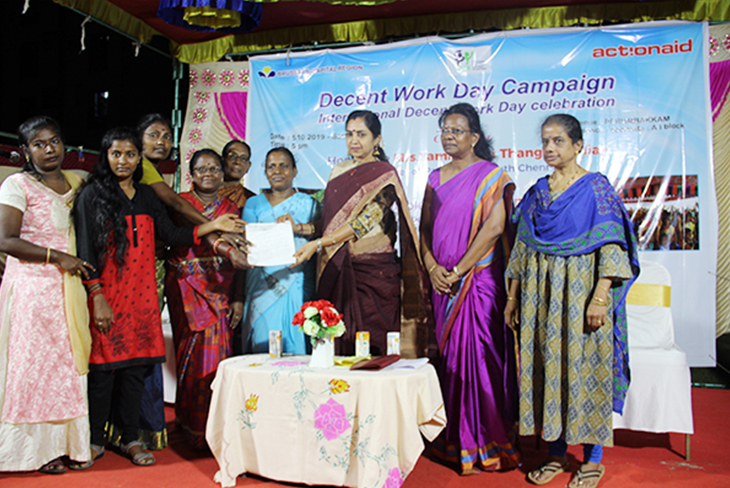 October 5 was witness to nearly 300 women from Perumbakkam, a suburb of Chennai, Tamil Nadu, coming together and raising the issues faced by them in the world of work. Organized by Tamil Nadu Domestic Workers Welfare Trust (TNDWWT) and ActionAid Association ahead of World Day for Decent Work that falls on October 7, this programme also saw participation of the constituency’s elected representatives – Ms. Thamizhachi Thangapandian, MP, Chennai South; and Mr. Aravind Ramesh, MLA, Sholinganallur.

During this programme, women from the informal sector spoke about their need for recognition as labour, regulation of wages and work conditions, and their rights to social protection and dignity. Several voices during the meeting also called for redressal of challenges that adversely affect women’s participation in the workforce and come in the way of their access to decent work, including those pertaining to healthcare, transport and safety. Members of the local domestic workers’ collective also demanded for fixing Rs. 75 per hour as the minimum wage, besides a national legislation for domestic workers.

Reiterating her resolve to work towards gender equality at work as well as in society, Ms. Thangapandian, the MP, assured that she would continue to raise the issues of women workers in the Parliament. You would be glad to learn that on hearing from the workers, the MP and MLA have already started acting on their issues and following up with the relevant departments.