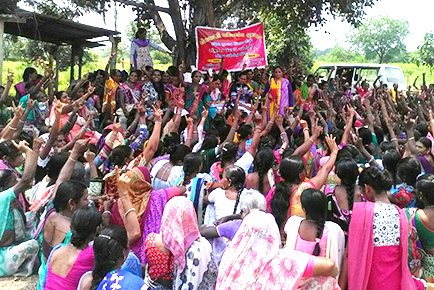 Ekal Nari Shakti Manch (ENSM), a movement of ‘single women’ in Gujarat, has been working for the rights of ‘single women’, and their access to land, housing and other social security schemes. Formed with support from ActionAid Association in the aftermath of the humanitarian response to the 2001 Gujarat earthquake, ENSM is now present in 10 districts of the state.

ENSM had been actively campaigning for adequate and comprehensive social security for ‘single women’ and specifically, an increase in their monthly pension. ENSM held meetings with various government officials and submitted the memorandum of demands of ‘single women’ to them. As a result of their continued advocacy, the Government of Gujarat recently increased the pension amount for ‘single women’ from Rs. 1,000 to Rs. 1,250.

ActionAid Association India, along with allied organizations, has been working with ‘single women’ in diverse contexts for around two decades now. To know more, read our publication, Single, Yes… But Not Alone. Besides, we have been taking the hopes and aspirations of ‘single women’ to all major political parties for further advocacy. Read more in the news piece here.