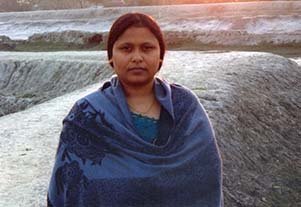 Halima Khatun, Uttar Mamudpur, Hingalganj, North 24 Pragna, West Bengal, was born to a poor family in a remote village in the Sundarbans. Her parents work as bidi rollers and toil throughout the day to run the family. Despite their poverty, they supported Halima’s education and encouraged her to move to Kolkata to join university.

Halima made her first foray into social development in college when she got involved with
the issues of fisherwomen in the Sunderban area. In 2009, she got an opportunity to
collaborate with ActionAid India when they started their intervention with Muslim women in
North 24 Parganas district.

“The villages were highly backward. Most of people didn’t have voter or ration cards. They
were not even aware of the processes to get those entitlements. It was extremely rare to see
girls from our community going to schools. When we started working, women never dared to
speak up against injustice, living in fear of influential people who always made it a point to
preserve patriarchy and deprive women. Gradually things began to change. With support of
ActionAid India, we carried out consistent interactions among women at different levels and
provided exposure and training with women from other districts on different occasions”, says
Halima.

“By now around 2000 women have organised under Hasnabad, Hingalganj Muslim Mahila
Sangha (HHMMS) and there are adolescent girls groups spread across 17 Gram Panchayats,”
she informs.

Halima and other women from HHMMS have so far filed 215 RTI applications, resulting in
550 girls getting scholarships. They have stopped 15 child marriages, and also rescued
several girls from trafficking. 700 beedi workers have received identity cards because of
Halima and her organisation’s efforts.

Halima’s actions have antagonized powerful vested interests in society. She received
numerous calls, threatening her with dire consequences including physical and sexual
violence.

“I deserved it, they said. As I was instigating women to demand for their rightful dues, I was
encouraging them to come out of their houses and explore the world. However, the attitudes
of these supressing forces were slowly changing over time. They see me in the media
regularly with our struggles and positive stories of change,” she adds.

Life has changed for Halima too. She is now married with a child. She continues to lead and
inspire many to join the struggle. “We are now in the process of forming a larger platform of
Muslim Women in West Bengal called Paschim Banga Muslim Mahila Sangathan. It is very
satisfying to see women getting organised and standing against suppression, asserting their
rights for a better life – which was quite an impossible task couple of years back,” Halima
says.