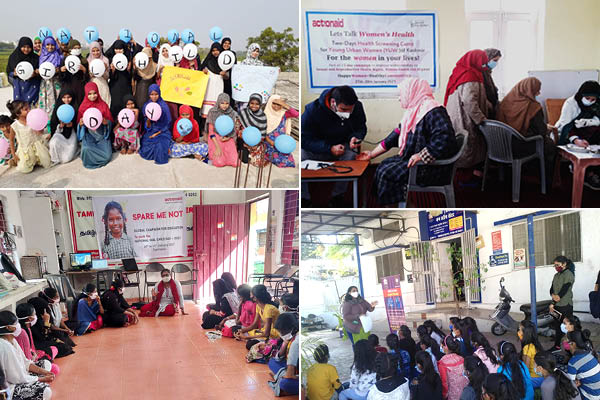 Gender inequality in our society manifests itself in several discriminatory beliefs and practices against girls and women. ActionAid Association has been working towards ensuring care, protection, nutrition, and education of all girls. On National Girl Child Day on January 24, we organized several programmes across states, especially considering the additional vulnerabilities and risks being faced by girls and young women from marginalized communities in times of the pandemic.

In Srinagar and Pulwama districts of Jammu and Kashmir, we organized awareness-building meetings for girls and women on sexual and reproductive health and rights (SRHR). The importance of nutrition and maintaining menstrual health and hygiene was focussed on, especially during the programmes held with adolescent girls. Health issues such as Polycystic Ovarian Disease (PCOD), mood disorders and thyroid-related illnesses which are widespread among females in the region were also discussed. Besides, we facilitated health screening camps on the occasion; nearly 100 girls and women went through the same.

In Hyderabad, Telangana, we organized a programme to felicitate 10 young change-makers who had not only brought a positive change in their lives but also in the lives of other girls and young women. During the meeting, they shared their inspiring stories of struggle, including how they resisted early marriage and continued their education; and how they are orienting communities on a variety of issues inclduing domestic violence, sexual violence at workplace and home, and unpaid care work. More than 175 young women from 10 bastis participated in the meeting. A programme on gender was also held in Perumbakkam, Tamil Nadu, wherein the various gender-based stereotypes prevalent in society were openly discussed. Participants talked about the many kinds of unpaid work they do as girls and women in their daily lives. The importance of education for girls was also emphasized. The young girls present at the meeting were also oriented on scholarship schemes and skill-development programmes available for girls and women at national and state level.

In Patna, Bihar, nearly 100 adolescent girls and women joined the various awareness-building exercises organized on the occasion to empower them to assert their rights. They collectively called for a safe and secure environment for all and an end to gender-based violence. In Madhya Pradesh, we are working in collaboration with the State Police Department’s Mahila Apraadh Shakha’s ‘Samman Campaign’. We worked with the department to orient adolescent girls and women on safety guidelines and the government schemes pertaining to their safety and security. On National Girl Child Day, we organized a meeting with girls and young women in Bhopal to train them on this format and the Safe City initiative being run by the state government. We also conducted an exercise where these girls and women were asked to identify unsafe locations in their neighbourhood and share with us. Similar programmes on the issues and rights of girls and women were facilitated in Ahmedabad, Gujarat; Bhubaneswar, Odisha; and Lucknow, Uttar Pradesh.