Hope in a Dying River: The Women Fishworkers of West Bengal 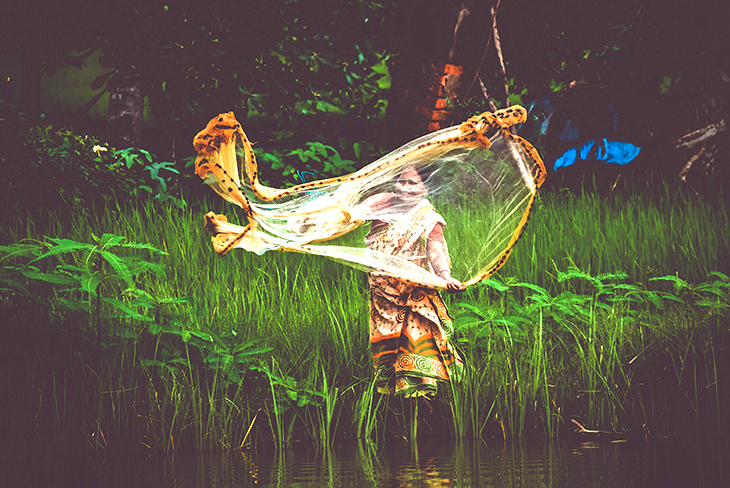 On the banks of the Subarnarekha river in West Bengal, a group of women fish workers have a success story to share.

The Subarnarekha river rises in Jharkhand, cuts through the Jhargram district of West Bengal, and flows into the sea in Odisha’s Balasore district. It is a dying river because its seasonal flow has been impacted by both multipurpose projects along its course and the release of mining effluents. The fate of the Subarnarekha is emblematic of the mis-management of rivers and water bodies that marks West Bengal, and in fact the whole country.

Some time ago the women in Nayagram, in Jhargram district approached their Gram Panchayat and managed to secure free access to a two-acre pond, into which they introduced juvenile fish or fingerlings. Some they had purchased and some they had captured from the river, relocating them to the pond. Through collective action, and over time, these women were able to convert an unproductive pond into a sustainable, ecologically sound livelihood asset, empowering themselves and their community.

However attitudes changed in the Gram Panchayat, and the access to the pond was denied to women. The women fish workers did not give up. With their modest earnings from selling fish, they leased two other privately owned ponds, introduced fingerlings here as well and repeated their success story. They acquired the skills to prepare organic feed for the fish, and even constructed a small hut nearby, where they took turns watching over the ponds.

Their story is indicative of what can happen when communities know their rights, and are able to develop the skillsets needed to protect and enact them. The women of Nayagram overcame several challenges. Like other communities that depend on fast degrading rivers and water bodies, they were threatened by a loss of livelihood, which they overcame by fish farming in a local pond. Denied access to the water commons, they organised themselves and pooled their earnings to gain access to two other ponds, where with determination they were able to repeat their success story.

Central to their ability to overcome these challenges was the organisation known as Direct Initiative for Social & Health Action, or better known as its acronym Disha. Disha works with fishing communities in West Bengal to conserve and sustain marine, coastal and inland natural fish resources, and preserve the traditional livelihood practices that depend on them. Together with ActionAid Association, Disha started its interventions across across 174 villages in 75 Gram Panchayats across the districts of Purba Medinipur, Dakshin 24 Parganas, Uttar 24 Parganas, Howrah and Hooghly in West Bengal, in 2015. The collectives of fish workers set up by Disha have now spread to nine districts, also including Paschim Medinipur, Jhargram, Nadia and Cooch Behar districts. More than 94,000 people in 25,000 households have been impacted by the initiatives led by DISHA.

Disha’s efforts with the fisher community over the last few years also include policy-level interventions and the development of a national network — from cooperation with the government to implement various schemes and entitlements for small scale fish workers, to defending community rights in the face of unjust denials; from collectivising growing numbers of marginalised women fish workers and “tiger widows”, to progressing towards the formation of fish production groups and cooperatives.

Thirty-two year-old Shikha is a “tiger widow”. Some years ago she lost her husband to a tiger attack, and was left to raise two young children alone. She was entitled to compensation from the forest department worth 2.5 lakh, and insurance benefits worth one lakh, but red tape dragged out the process. Shikha was eventually able to secure the compensation with Disha’s help.  “My situation was so tough that even managing the daily ration was a challenge for me. Our monthly family income was just 2000 rupees. As my children are young, I could not leave them alone in the village and go to the city for work. Nor could I take them with me. Some villagers and relatives wanted to help, but they too are poor and couldn’t do much. I would like to thank Disha and ActionAid, they helped me a lot in getting the insurance money. They helped me raise my income through fish farming and crop cultivation on our small holding of land,” says Shikha.

While the success stories are plenty, challenges remain. Environmental encroachment and pollution remains a key challenge — as intensive fishing returns higher profits than crops, agricultural land is increasingly being diverted towards fish farms. Water released from these farms pollutes nearby rivers, adversely affecting the local fish and river diversity on which small scale fish-workers largely depend. In some areas, shrimp cultivation disregarding the permissible feed and fertiliser limits has contaminated the water and destroyed resources, presenting a major challenge to local fishermen dependent on them.

Across the world, fishing communities tend to be among the most marginalised, relying upon healthy oceans and rivers to provide jobs and food. We need to protect these natural resources and only use them sustainably, as healthy oceans, coasts and freshwater ecosystems are not just crucial for economic growth, but central to the effort to address ecological destruction and climate change. While it is true that human activity has threatened water bodies — through industrial overfishing, pollution, construction along coasts, and other destructive and unsustainable practices— the livelihood of those  dependent on these ecosystems must also be protected.

Equipping these communities with knowledge of their rights and entitlements, and enabling them to put these in action collectively, will contribute to fighting poverty of course. But it will also help protect oceans, coasts and freshwater ecosystems. This is because these small and traditional fisher communities are the largest non-consumptive primary stakeholders and natural custodians of our rivers and water bodies. Because good fish needs good water, small scale fish workers and fishing communities protect water and fish resources. Their livelihood depends on a healthy and diverse ecosystem.