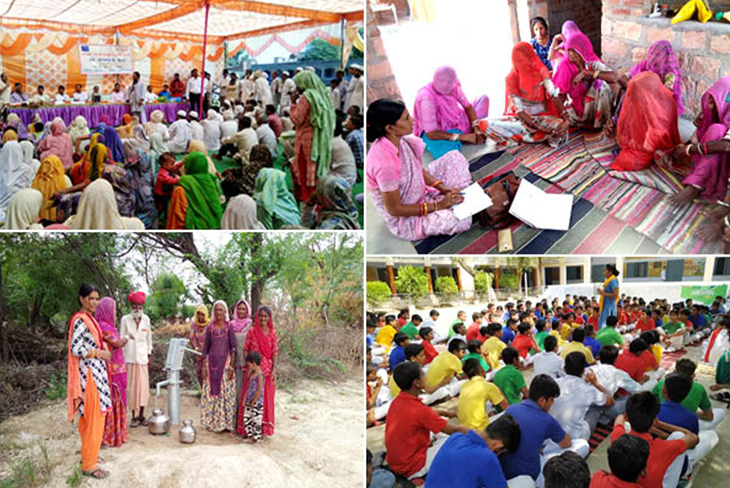 With support from the European Commission, we have been running an initiative across a total of eight districts in Bihar, Haryana, Rajasthan and Uttar Pradesh to protect and promote the rights of Dalits, minorities and De-Notified Tribes (DNTs). Covering 170 villages, this programme is working since 2018 to enhance access to justice, basic services and welfare schemes for discriminated communities through dialogues with relevant authorities, capacity-building of communities and community-led monitoring of implementation of laws, policies and services.

Mobilizing the community and training community-based activists as Human Rights Defenders (HRDs) have been important components of the intervention. A total of 486 HRDs, including 230 women, have so far been successfully trained and they are now actively intervening on issues of human rights violations in their communities. 164 community support groups with more than 2,600 members across the four states have also been formed and oriented at the village-level to monitor and investigate cases of discrimination and atrocities, including discrimination in schools, health centres and welfare schemes. Between May 2018 and December 2020, 317 cases of caste and religion-based discrimination and atrocities have been brought to the attention of authorities. Community-based HRDs carried out fact-finding missions and helped victims report to the police, besides providing them counselling and rehabilitation support. We have, so far, been able to facilitate government compensation of Rs. 2,57,06,700 for 93 victims of atrocities. As part of this intervention, we have been actively engaging with national as well as state-level Human Rights Commissions, Minority Commissions, Scheduled Castes and Scheduled Tribes Commissions, and Women’s Commissions. To ensure timely justice for victims, the HRDs have also been following up with the district administration and law enforcement agencies as needed.

Furthermore, the HRDs under our programme have been able to support more than 12,350 households across the four intervention states to apply for government welfare schemes, especially under the Scheduled Caste Sub-Plan (SCSP) and the Multi-Sectoral Development Plan (MSDP). Besides, a scholarship campaign launched by us in these states facilitated the filling up of scholarship applications for nearly 75,000 students from marginalized communities (40% of them girls). Following the onset of the COVID-19 pandemic, the HRDs actively supported the distribution of relief material among those in need. Through 32 webinars in 2020, we were also able to orient over 15,000 individuals on the various entitlements and helped several of them access the same.

As part of this initiative, a Draft Special Component Plan for Scheduled Caste Development Authorities Bill has been prepared and shared with the Bihar Legislative Assembly and Uttar Pradesh Legislative Assembly for enactment. Our efforts had a role to play in getting The Rajasthan Protection from Lynching Bill, 2019, passed by the Rajasthan Legislative Assembly. Besides, a Model Law for Muslims and a Model Rehabilitation Policy for DNTs have been drafted following intensive discussions with concerned academicians, social activists and policy-makers. In addition, a bill for the protection of Human Rights Defenders was drafted and tabled as a Private Member’s Bill in the Parliament of India. Going forward, we would continue to engage with policy-makers and public representatives on the issues and demands of excluded communities.