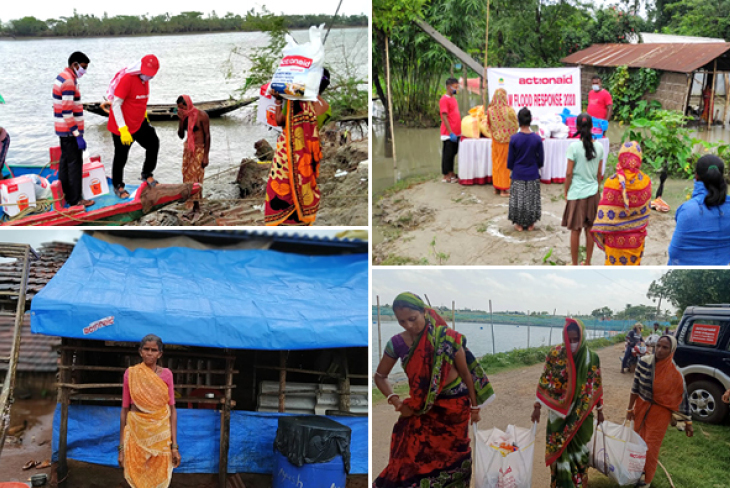 Amid the struggle to cope with the COVID-19 pandemic, several states in India had to bear the brunt of other natural disasters too. While West Bengal, Odisha and Maharashtra witnessed devastating cyclones in the recent months, Assam and Bihar have been experiencing catastrophic floods. Across all these calamities, together with our supporters and allies, our teams have been on the ground and responding, providing humanitarian support to those worst affected.

Cyclone Amphan hit the eastern coast of India on May 20, claiming several lives and leaving behind a trail of destruction in West Bengal and Odisha. In its aftermath, our state teams swung into prompt action, conducting needs-assessment in the worst-hit areas and mapping those most vulnerable. Subsequently, we initiated the distribution of relief material among the families identified. In West Bengal, we reached out with ration and hygiene items to more than 7,300 families across four districts, namely South 24 Parganas, North 24 Parganas, East Medinipur and Kolkata. In Odisha, a total of 800 worst-affected families from the districts of Balasore, Bhadrak and Jagatsinghpur were provided with relief support. Families dependent on informal economy, fishing communities, agricultural labourers, single women, the elderly and persons with disability continued to be at the centre of our cyclone response. You can view our updates from the Cyclone Amphan response on this Twitter thread.

Cyclone Nisarga arrived on the western coast of India on June 3, making landfall in Raigad district of Maharashtra. Large parts of the district were devastated as a result, including numerous kutcha houses and farms, and several families lost their food grains and other essential items. Based on the rapid needs-assessment, our state team thereafter devised a response plan to meet the immediate needs of those most vulnerable, i.e. the Katkari tribe. Landless and living in poverty and exclusion, a total of 1,000 families in Raigad belonging to this tribe were provided dry ration and hygiene kits. We also supported them with tarpaulin sheets for them to cover their leaking or blown-away roofs, thereby helping them stay safe in their houses and tide over the monsoon. Amid the livelihood losses being suffered by community members as a result of the COVID-19-induced distress, we also ran a cash-for-work initiative for fitting tarpaulin sheets on houses. For more on our Cyclone Nisarga intervention, visit this Twitter thread.

Assam has been reeling under the fury of multiple phases of floods for several weeks now; the disaster has claimed numerous lives and is leaving lakhs of people across the state badly affected. Responding to the emergency, we have been providing relief material to the worst-hit households across Barpeta, Dhemaji, Dhubri, Golaghat and Morigaon districts. So far, we have distributed hygiene kits to 1,406 families and tarpaulins to 175 of them to help them cover the damaged roofs of their huts. Besides, we have reached out to 478 families with feed for their cattle. Recognizing other urgent needs of the local communities, we have been constructing temporary toilets in villages and are ensuring people’s access to potable drinking water through iron removal handpumps. In addition, to minimize the risk of water-borne infections, our teams are carrying out decontamination drives in relief camps and flood-hit villages. Given the ongoing COVID-19 pandemic, we are also continuing to sensitize communities on how to prevent the spread of infection and stay safe. You can follow this Twitter thread for continued updates on our Assam flood response. We have also initiated efforts to support the communities being affected by the ongoing floods in Bihar. We distributed dry ration kits to 155 most vulnerable families in Musahari block of Muzaffarpur district.

Recognizing that emergency situations affect marginalized communities disproportionately, we have been focussing our response across disasters on people living in poverty and exclusion, and amongst them, those more vulnerable, i.e. women, children, the elderly and persons with disability.