Humanitarian Response to Cyclones and Floods 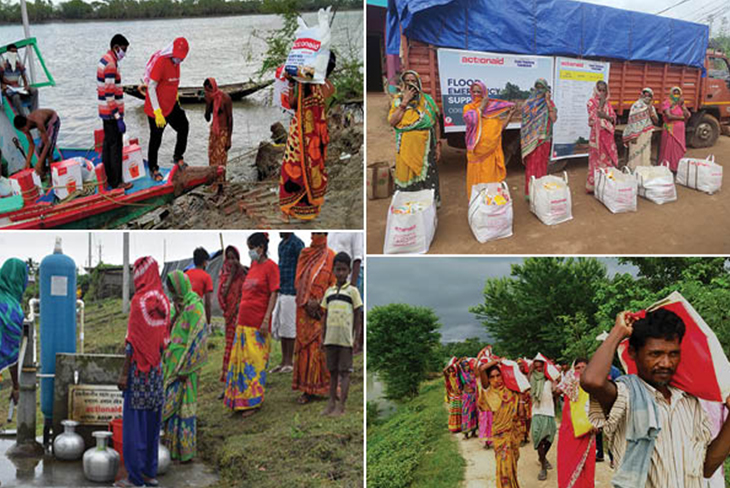 Amid the struggle to cope with the COVID-19 pandemic this year, several states in India had to bear the brunt of other natural disasters too. While Maharashtra, Odisha, Tamil Nadu and West Bengal witnessed devastating cyclones, Assam, Bihar, Odisha and Telangana experienced heavy rainfall, causing floods in several locations. With villages and slums inundated, crops ruined, and houses and other community infrastructure damaged, affected people in these states needed urgent support. Together with our supporters, allies and volunteers, we were immediately on the ground and responding, providing humanitarian aid to those most vulnerable!

Cyclone Amphan hit the eastern coast of India in May leaving behind a trail of destruction. Our teams in West Bengal and Odisha promptly swung into action. In West Bengal, we reached out with ration and hygiene items to more than 7,300 families across the districts of South 24 Parganas, North 24 Parganas, East Medinipur and Kolkata. In Odisha, our teams provided relief support to a total of 800 worst-affected families in the districts of Balasore, Bhadrak and Jagatsinghpur. In June, Cyclone Nisarga hit the western coast of India, making landfall in Raigad, Maharashtra. Large parts of the district were devastated as a result. Our teams reached out with dry ration and hygiene kits to 1,000 families belonging to the vulnerable Katkari tribe. We also supported them with tarpaulin sheets to cover their leaking or blown-away roofs and ran a cash-for-work initiative to fit tarpaulin sheets on houses. Cyclone Nivar hit Tamil Nadu in November. After quickly assessing the damages, our ground teams have now initiated the response efforts to support the worst-affected.

Assam witnessed the fury of multiple phases of floods this year. Responding to the emergency, we reached out with relief material to the worst-hit households across the districts of Barpeta, Darrang, Dhemaji, Dhubri, Golaghat, Kamrup, Morigaon and Sivasagar, distributing hygiene kits to 2,963 families and tarpaulins to 572 of them. We also provided 1,686 families with feed for their cattle. Besides, we constructed temporary toilets in Barpeta, in addition to ensuring people’s access to potable drinking water through iron removal handpumps in Barpeta and Morigaon. Our teams also carried out decontamination of drinking water sources, and cleaning drives in relief camps and flood-hit villages to minimize the risk of water-borne infections. In support of communities affected by floods in Bihar, we distributed dry ration kits and masks to 400 families in Samastipur, 355 families in Muzaffarpur, 700 families in East Champaran and 719 families in Sitamarhi. Our volunteers also facilitated communities’ access to various government welfare schemes. Following the recent floods in Telangana and Odisha, we reached out with dry ration and sanitation kits to a total of 1,045 disadvantaged families in Hyderabad and 500 families in Puri. Besides, we have been conducting disaster preparedness trainings for women in Odisha in disaster-prone areas.

Our teams across states ensured adherence to all necessary safety protocols during relief distribution programmes in light of the ongoing pandemic. Recognizing that emergencies affect marginalized communities disproportionately, we focussed on people living in poverty and exclusion and dependent on the informal economy, and among them, those more vulnerable, i.e. women, children, the elderly and persons with disability.