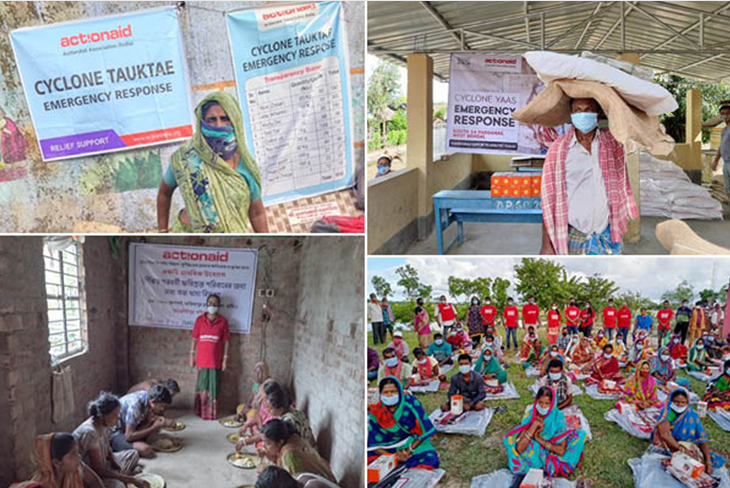 In May 2021, as India witnessed a steep rise in COVID-19 trajectory, the states of Gujarat, Odisha and West Bengal faced devastating cyclones. The vulnerable sections which were still recovering from the distress caused by the pandemic had to struggle now to cope with the destruction caused by these cyclonic storms. With villages inundated, crops ruined, and houses and other community infrastructure damaged, affected people in these states needed urgent support. So, together with our supporters and the grassroots-based social organisations, we were on the ground, providing humanitarian aid to those most vulnerable.

Cyclone Tauktae made landfall on Gujarat’s Saurashtra coast on May 17, leaving behind a trail of destruction. The districts of Ahmedabad, Amreli, Bhavnagar, Botad, Gir Somnath and Junagadh were severely affected. The ferocious winds, along with heavy rainfall, had damaged several kutcha houses and agricultural fields, besides disrupting road and phone connectivity, electricity and water supply. The livelihoods of fish workers, saltpan workers and petty shopkeepers also took a hit. Since Amreli district was the worst affected, in June, we initiated efforts to support the most disadvantaged families there, in addition to some badly hit ones in Ahmedabad and Bhavnagar. We reached out to a total of 904 households across these three districts with tarpaulin sheets for them to cover their blown-away roofs, thereby helping them stay safe in their houses and tide over the monsoon. We also provided them with dry rations to help meet their immediate needs. As part of this intervention, our focus was on women-headed households, pregnant and lactating women, nomadic and de-notified tribes, and the elderly.

A few days later, on May 26, the Odisha and West Bengal coasts were hit by Cyclone Yaas. Our teams in these two states rapidly swung into action and devised a response plan. In Odisha, we reached out with ration and sanitation kits to 470 worst-affected households in Balasore and Bhadrak districts. In West Bengal, we supported 600 such families in East Medinipur district with dry rations, besides providing 500 families with cooked meals twice a day for 15 days in the immediate aftermath of the cyclone.

We also received support from Start Network, a consortium of international humanitarian agencies of which ActionAid is a member. As a result, we could ensure cash transfer and relief kits for a total of 2,089 more vulnerable families. In Odisha, we provided an amount of Rs. 4,000 to 800 families in Bhadrak, and an amount of Rs. 2,500 along with shelter kits to 247 families there. In West Bengal, our joint response supported 792 families in South 24 Parganas with cash transfers of Rs. 4,000 each, and an additional 250 households with Rs. 2,500 along with shelter kits. Our Cyclone Yaas response – spanning the months of June and July – focused on the most marginalised, including people with disability, single women and the elderly.