Humanitarian response to emergencies: Building back better and stronger 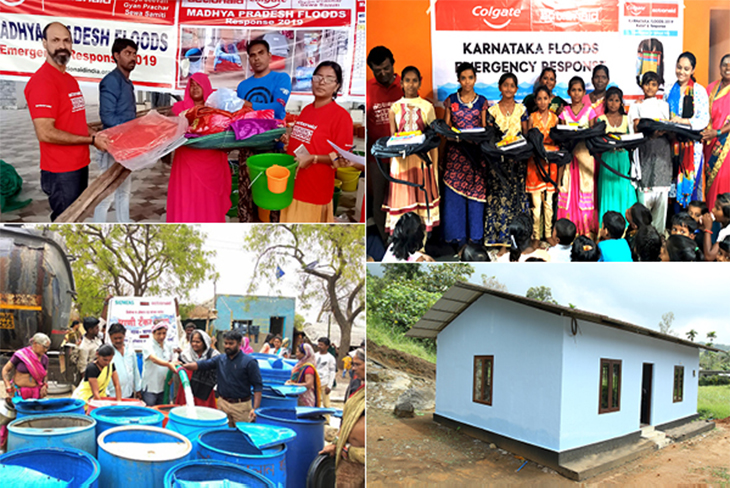 2019 witnessed varied natural disasters striking different parts of the country. Floods, cyclones and drought – India saw it all! While the states of Assam, Bihar, Karnataka, Madhya Pradesh and Maharashtra were hit by devastating floods between July and September, the regions of Bundelkhand in Uttar Pradesh and Marathwada in Maharashtra reeled under severe drought. Odisha, on the other hand, had to bear the brunt of Cyclone Fani and the consequent havoc. Across all these calamities, ActionAid Association teams were there on the ground and responding. Together with our supporters and allies, we provided humanitarian support to those affected across all these states.

The catastrophic floods in Assam, Bihar, Karnataka, Madhya Pradesh and Maharashtra claimed several lives and caused huge damage to houses, agricultural fields, livestock, standing crops and infrastructure. As part of our flood response interventions, we reached out to several families in the worst-affected districts of Assam as well as Bihar, Karnataka, Madhya Pradesh and Maharashtra with relief and rehabilitation support. We also reached out to the worst-affected populations in the drought-hit regions of Bundelkhand and Marathwada with drought relief support. We provided drinking water and livelihood support to affected communities, besides fodder for livestock. In addition, we have been facilitating the rejuvenation of water bodies in villages and building awareness on water conservation and management. In Odisha, responding to Cyclone Fani, we supported several affected families with ration and hygiene kits and house repair support, besides educational kits for children from affected communities.

More than 400 people lost their lives due to floods in Kerala in 2018, in what was the worst flood hitting the state in almost a century. The havoc caused by floods and landslides displaced lakhs of people and hugely damaged the state infrastructure. Besides, several thousand hectares of crops got destroyed in these devastating floods. In the immediate aftermath of floods, ActionAid Association, together with its supporters, allies and volunteers, distributed dry rations, hygiene kits, shelter kits, clothes, water purifiers etc. to the most vulnerable households. Furthermore, with a view to supporting communities to rebuild their lives and livelihoods, we distributed seeds and other agricultural inputs to the worst-affected households in two Panchayats of Idukki district. The interventions in these Panchayats also comprised the repair/reconstruction of community infrastructure – anganwadis, schools and a community hall, damaged by the floods and landslides.

Recognizing that emergency situations affect vulnerable communities disproportionately, we at ActionAid Association focus our efforts on people living in poverty and exclusion, and amongst them women, children, the elderly and persons with disability. You would be pleased to learn that our response to emergencies seeks to ensure community-led responses that promote the dignity of the affected communities; remains committed to a long-term response while providing immediate relief; and works with proven processes of accountability and transparency to all stakeholders, including the communities we serve.