Humanitarian Response to Floods in Assam 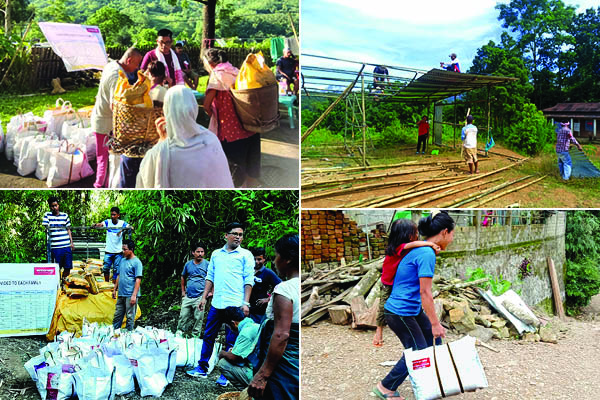 The North-East of India is experiencing a catastrophic impact of climate change as extreme weather events are increasingly causing emergencies every year, affecting the lives of millions of people. This year, there was excessive rainfall in several locations of the region, primarily in Assam. And some of the highest rainfall since records are kept occurred in May.

In Assam, the most severe event occurred in Dima Hasao on May 16 and 17, 2022. The district witnessed flash floods and massive landslides, causing entire hillsides to slip and claiming several lives. The disaster disrupted people’s livelihoods as it destroyed farms and community infrastructure. The district also saw the collapse of communication and transportation systems, including railway tracks, roads and bridges.

In the wake of the emergency, ActionAid Association was on the ground and responding. With support from START Network, we reached out with immediate assistance to those most vulnerable. We provided rations, hygiene kits and tarpaulin sheets to 2,100 families in Dima Hasao, most of them from the marginalised Dimasa, Hmar and Zeme tribal communities. We provided another 270 households in the district with Corrugated Galvanised Iron (CGI) sheets for roofing. In addition, we provided affected communities with 280 water storage tanks, each with a capacity of 500 litres. Finally, we constructed 280 temporary toilets in the district as part of our humanitarian efforts.

You, too, can help us help those worst hit. Donate now.