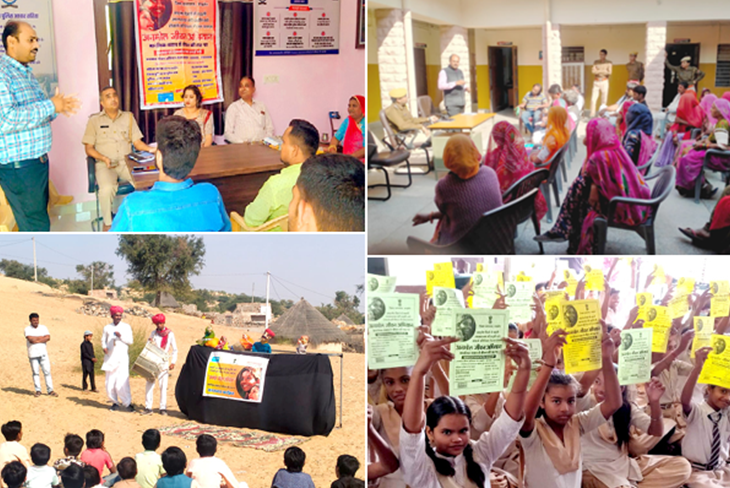 Barmer, in Rajasthan, has been in the headlines of late due to a surge in the cases of mass suicides, with parents jumping into wells along with their children. The increasing incidence of suicides has occurred over the last few years. The number of people dying by suicide in the district has increased from 132 in 2019, to 152 in 2020 and 171 in 2021. The reasons behind suicide range from domestic disputes and relationship breakdowns to abuse and trauma. Given this worrying trend, on World Mental Health Day last year, i.e., October 10, 2021, the Barmer district administration, together with UNICEF India and ActionAid Association, rolled out ‘Anmol Jeevan’, a campaign to stop this trend and raise awareness on the need to secure mental health.
As part of this initiative, we drew up a district-level strategy, followed by a corresponding action plan to address the growing menace of suicides. After identifying Chohtan, Dhanau and Dhorimanna as high-prevalence blocks, we organised training on the issue of mental health and ways of preventing suicides, conducted by technical experts. Participants included district and block-level stakeholders, including government officials, police officers, counsellors, frontline workers and media persons. Participants were oriented on the objectives and strategies of the Anmol Jeevan campaign.
Sensitising communities against all forms of self-harm comprised a significant part of this campaign. We trained more than 600 frontline workers from the three high-prevalence blocks of the district as Suraksha Sakhis who, together with community-based Human Rights Defenders, started generating awareness on mental health and identifying people needing help. We used specially designed puppet shows, informative posters, pamphlets and videos to spread awareness through community meetings and awareness vehicles. As a result, we reached more than 75,000 people across 124 Gram Panchayats of the three blocks mentioned above with positive, inspirational messaging.
Furthermore, as part of this initiative, a 24-hour helpline has been launched to address the risks of self-harm and suicidal tendencies. Open all seven days a week, the helpline provides a comfortable space for community members to discuss their issues and vent any negative emotions they might be experiencing. In addition, the three counsellors appointed provide compassionate counselling to women, men and children on how to deal with stress. So far, the helpline has provided 68 individuals needing urgent help with counselling. Besides, linkages with government departments, as and when required, are being appropriately facilitated under the campaign and cases requiring police intervention are referred to the nearest police stations.