Paving the Way for Children’s Rights and Empowerment 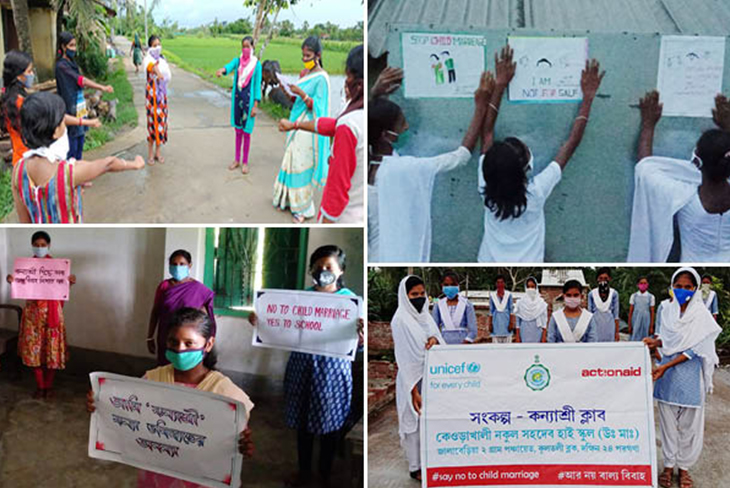 Home to one in every three child brides in the world, child marriage in India is a cause of great concern. While the recent National Family Health Survey (NFHS) data indicates that over the last decade, there has been a decline in the prevalance of child marriage in India, in some states, its incidence continues to be high.

Since February 2019, we have been running a programme to strengthen the institutional capacity of crucial district government stakeholders to prevent child marriage and enhance adolescent empowerment. Working with UNICEF, this initiative covers Bihar (13 districts), Jharkhand (10 districts), Odisha (15 districts), Rajasthan (eight districts) and West Bengal (six districts). South 24 Parganas is one of the intervention districts under this programme, given the high rate of child marriage there.

Child Protection Committees (CPCs), as mandated under the Integrated Child Protection Scheme, form a vital community-based mechanism to protect and promote the rights of children at the grassroots. We work closely with the district as well as block-level officials to strengthen CPCs in villages, including their reconstitution to increase the number of adolescent representatives in each committee. As a result, adolescent girls’ representatives from school-level adolescent groups have been invited as members of CPCs at block and village-level. This has also helped build leadership among these young members. They now coordinate with government officials, police personnel, NGOs, Childline and other stakeholders to address issues of child rights’ violations.

Recently, during the COVID-19 lockdown, two adolescent CPC representatives of Kanthalberia village in Basanti block of South 24 Parganas learnt about a child marriage being planned. A 15-year-old girl from Kanthalberia was going to be married with a young boy from Digha. These adolescent CPC members immediately informed the appropriate authorities who then alerted the District Coordinator (DC) recruited under this UNICEF-supported intervention about the case. Without losing any time, the DC connected with the District Child Protection Unit, Block Development Officer, the local police station and Childline. The collaborative efforts subsequently succeeded in stopping the planned child marriage. The girl’s family was later counselled by Childline. They have promised in writing that they would not marry off their underage daughter till she attained the legal age of marriage.

You would be happy to learn that so far, under this UNICEF-supported programme, a total of 1,205 child marriages have been stopped across the five states mentioned above.

We are pleased to share another heart-warming update from this programme in West Bengal. Our District Coordinator from Alipurduar district has been working closely with the district administration amid the ongoing pandemic to support those most vulnerable. In consultation with the Deputy Chief Medical Officer of Health-II, the DC made storybooks in Hindi, English and Bengali available for children and adolescents staying at the district’s 22 quarantine centres and a COVID-19 hospital, so they could deal with boredom and anxiety. We are happy to have been able to support the administration in this initiative and are grateful to them for this collaboration.