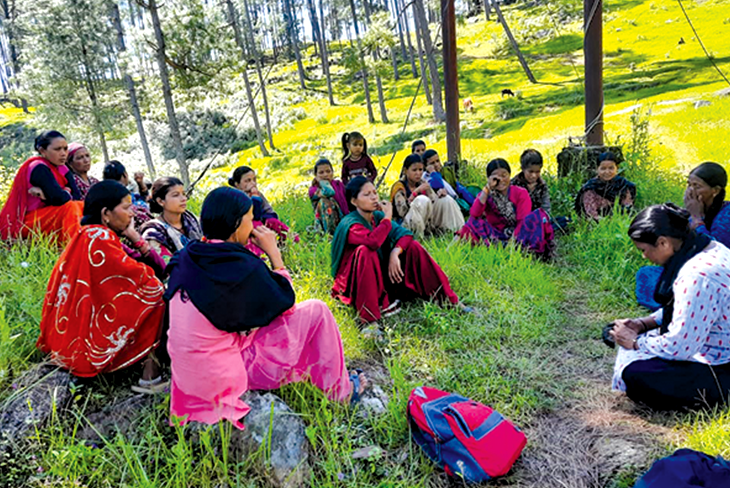 The Kimkhola Gram Panchayat in Dharchula block of District Pithoragarh, Uttarakhand, is home to 56 families from the Raji tribe. The Raji community is one of the most marginalised communities in the district, lacking access to basic rights such as food, shelter, healthcare, education and livelihood. Together with Association for Rural Planning and Action (ARPAN), ActionAid Association has been working with families from this disadvantaged tribal group to protect and promote their rights.

As part of our intervention, we facilitated the formation of a village-level community-based organisation of the Raji tribe. The members of this tribe did not have any identity proofs or documents, such as Aadhaar cards, ration cards or job cards; they also lacked awareness about their rights and entitlements. To enable their access to the same, we organised orientation meetings and facilitated their interface with Government officials from various departments. Through these processes, community members got themselves registered and secured identity documents, enabling them to access the due entitlements.

Given their erstwhile nomadic lifestyle, the families from the Raji tribe did not have any land in their name. Following awareness-building on land rights as part of our intervention, they started voicing their demands. They also submitted land claims to the Sub-Divisional Magistrate (SDM), Dharchula, and the District Magistrate (DM), Pithoragarh, followed by regular follow-ups with their offices.

The SDM released a notice to the State’s Revenue and Social Welfare Departments, taking forward the Raji families’ expressed need for land. Subsequently, land mapping was done in the presence of the Van Panchayat. It is important to note that we ensured community participation across all exercises undertaken by the various departments. We are pleased to share that 28 families from the Raji tribe have consequently received Individual Forest Rights (IFR) under the Forest Rights Act, 2006.

In Himachal Pradesh’s Chamba district also, we are engaged in an intervention to facilitate tribal families’ access to IFR and Community Forest Rights (CFR). Across five villages in Mehla and Chamba blocks, our teams are sensitising the marginalised Gujjar and Gaddi communities on land rights and supporting them in submitting their land claims. As a result, five CFR claims likely to benefit nearly 100 families from the district have been submitted to the concerned Government officials. We are also facilitating community members’ interface with these authorities to help address any roadblocks and ensure their land rights access. A district-level committee – comprising officials from the district administration, community leaders and an ActionAid Association representative – has been formed to review all pending claims and support communities for further claim submission, followed by processing claims.

In the Ahmednagar district of Maharashtra, as a result of consistent efforts, the Mahadev Koli and Thakar communities in five villages from Akole and Sangamner blocks have received Community Forest Rights over 1,067 hectares of land, benefitting nearly 4,500 families. Additionally, CFR claims in five more district villages have been submitted, and the required processing is underway.