Rapid Assessment of Quarantine Centres in India: A Report 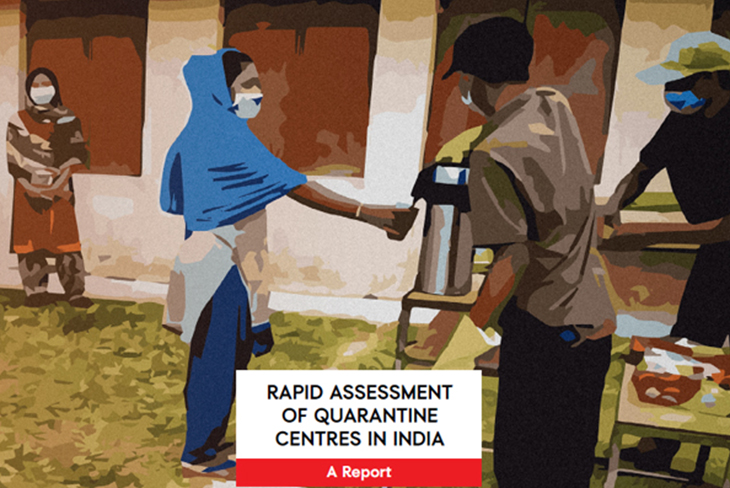 To quarantine migrants moving from one state to another and returning to their villages, the Union Government, State Governments and local administrations put in place a major infrastructure. To ascertain the status of related infrastructure and services with respect to security and protection of women and children, we recently carried out a rapid assessment covering 765 quarantine centres across 14 states – Andhra Pradesh, Assam, Bihar, Chhattisgarh, Gujarat, Jharkhand, Odisha, Madhya Pradesh, Manipur, Nagaland, Rajasthan, Telangana, Uttar Pradesh and Uttarakhand. The respondents were diverse, including those who were either present in quarantine or had been there earlier; those involved in managing and providing services at these centres; and those involved in their monitoring. While the survey outlined the exemplary task which the government authorities were able to attend to over a short period, the findings are also indicative of the scale of challenges of running these facilities, including the need for gender-responsive and child-friendly measures at these centres.

The guidelines issued by the Ministry of Home Affairs (MHA), Government of India, suggest the rooms or dormitory be separated and may be preferable with in-house capacity of 5-10 beds and each bed separated 1-2 meters apart from all sides. In the centres surveyed by us, nearly 87% facilities housed 2-8 persons per room, with 86% respondents sharing that the distance between two beds was one meter or more. Besides, 78% centres reported enough bedding available per person and in 89%, there was facility for safe drinking water. Our survey also found that in 24% of the centres, visits by medical professionals happened twice a week while in 21%, it took place just once a week.

On the specific needs of women and children, it was found that 22% of the centres did not have any separate rooms for women and children. 14% did not have any separate toilets for women, and 50% of the women who used the facility said there were no special provisions for pregnant and lactating women. Also, 50% of the centres surveyed were found to be lacking provisions such as sanitary napkins. There were several other services assessed by us during this survey. The corresponding findings and the recommendations emerging out of this study can be found in our report here. We hope that this survey, by bringing forward the gaps and challenges faced by inmates, would help the government strengthen quarantine infrastructure, and build a comprehensive and gender-responsive policy framework for our public health system at large.