Saying NO to child marriage 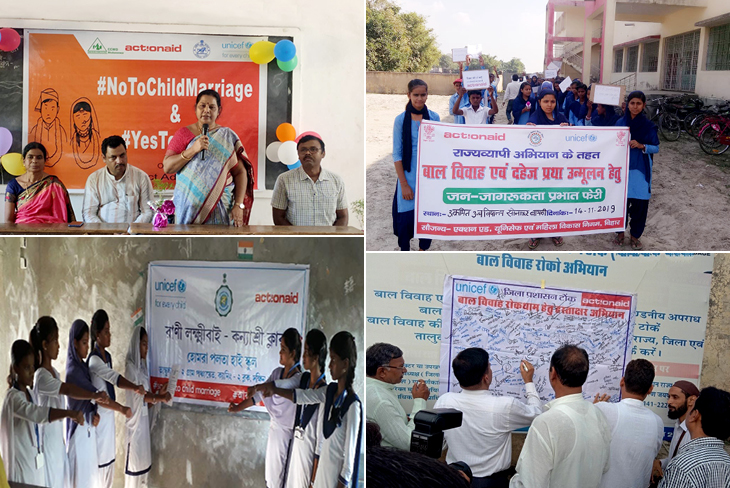 A report on the campaign to end child marriage in Rajasthan, West Bengal, Bihar and Odisha

Working with the support of UNICEF, ActionAid Association (AAA) launched the project “Strengthen institutional capacity of key district government stakeholders to enhance adolescent empowerment and to prevent child marriage” in February 2019, in the states of Bihar, Odisha, Rajasthan and West Bengal.

Through this project AAA has set up teams in select districts to work with district administration to ensure effective implementation of strategic plans for children and adolescents focusing on child protection priorities and that the districts who put into place mechanisms that will see the participation of children, especially adolescents in the implementation, review and monitoring of the plans. Apart from the teams put in place by AAA will work with the state administration to help design campaign plans to promote child rights especially focusing on right to education and ensuring safety of children. So far, a total of 163 child marriages have been stopped across the four states being covered under the programme.

What follows is a brief update on progress across the different states.

District Task Force has been set up in Tonk, Jaisalmer, Barmer, Karauli and Bharatpur districts, with members provided orientation about their role, responsibilities and operational guidelines. Baal sabhas (children’s assembly) were organised across 10 blocks of Bharatpur district. And it has been decided that along with Gram Sabhas, Balika Sabhas (adolescent girl’s meetings) would be organised at village level where the status, school enrolment and schemes for adolescent girls would be discussed. Mahila Shakti Samooh (women’s collectives) are being formed across 230 Gram Panchayats in Tonk district. In a meeting organised at the Panchayat Samiti, Chotan block, Barmer district on 5th September, 15 sarpanchs gave commitment to make their village child marriage free.

Home to nearly 250 families from diverse caste-based communities, Lador Kala in Karauli district, Rajasthan, is one of those villages where child marriage has always been seen as a normal practice. “Every year, 10 to 15 children from our village used to be married off during the Akha Teej season. None of us ever thought of it as a bad practice or even an unusual one since this was a regular custom in our village. Besides, sex-selective abortions, and discrimination and violence against women and girls were very prevalent too,” narrated Satyendra Jadoun from Lador Kala. As a result of the awareness campaign in the village this year no child marriages took place in Lador Kala village during the Akha Teej season!

Jalpaiguri, Malda and South 24 Parganas districts have formed District Task Force. Training and awareness programmmes have been held across all the operational districts, in South 24 Parganas, 58 adolescent girl representatives from 19 schools participated in Block level convergence meetings conducted across 4 Blocks. This has led to the formation and revival of 22 Kanyashree Clubs. On the same lines, 10 Kanyashree Clubs in Nagrakata block of Jalpaiguri are under process of revival. In Malda capacity building sessions were held with the Kanyashree Club members and nodal teachers in over 26 high schools of one block. In Malda training of Kanyashree Yodha and nodal teachers were with participation of 135 adolescent girls participated. In August 2019, Kanyashree Diwas was celebrated across all four districts. During the interactions with district administration, a case of child marriage was discovered and what follows is the narrative of how it was stopped.

Getting Shyama* back to school

It was on the eve of the block level meeting to strengthen Child Protection Committees and Kanayashree Clubs in September 2019 when the AAA appointed District Coordinator came to know from a local civil society organization that a child marriage was going to held in a nearby village on the evening of that same day. Shyama a 16 year old was going to be married off. The District Coordinator, together with the organization spread the news. They informed the Childline number, and other officials. Though the block level meeting took place as planned, it became a forum to work out plans to deal with this case. The Headmaster of school which Shyama attended, and three of her classmates were present in the meeting itself. They were unaware of the case. Fortunately, after intervention of Child Welfare Police Officer, Shyama’s marriage was stopped. Shyama’s father submitted a declaration promising not to arrange her marriage before she turned 18.

Shyama is back to school. The Headmaster of her school and the three classmates who had attended the block level meeting as Kanayashree Club leadershave committed to provide support all the support to Shyama to continue her education.

The Government of Bihar has put in place District Task Forces to combat child marriage. However many of them are not functional. District Coordinators, appointed by AAA have engaged with the district administration to activate the District Task force. AAA has recently facilitated the setting up of 24 sub-divisional and 128 block-level task forces in Bihar. 5,650 adolescent groups have been formed in 10 districts having a total of about 84,750 members. More than 250 community based awareness meeting have been held, in which detailed interactions were held with more than 8,000 community leaders.  The district and block level co-ordinators are working with the administration to be more effective in its interventions to stop and prevent child marriage. What follows below is the story of how a child marriage was stopped and the village community was mobilised to prevent further child marriages.

On September 23, 2019 Arvind Kumar received information that a child marriage was being planned for 29th September in Pagra village in Samastipur district of Bihar. Arvind is the district coordinator appointed by AAA for the project. Without losing any time, Arvind and Rashmi Kumari, the block coordinator with the project, contacted the District Task Force team and intervened in the case. They met the families of both the bride and the groom, informed them about the legal age of marriage and other provisions related to the Prohibition of Child Marriage Act. The team also met with Panchayat representatives and local religious and community leaders and oriented them on the Act and its provisions.

On September 26, during an urgent Panchayat-level meeting called on the matter, in the presence of SDM, Sub-Divisional Police officer, Block Development Officer, Panchayat representatives and community members, it was jointly decided to stop the planned child marriage. On that day in a community meeting at Pagra village, a collective pledge was made  that no child would be married before they reached the legal age.

Efforts to end child marriage are taking place in campaign mode in Odisha.  The District Task Force has been organized in all the districts, with action plans finalized in Rayagada, Kandhmal, Ganjam and Dhenkanal districts.  AAA has provided orientation to district officials on the role and responsibilities in developing district action plans and on the operationalization, monitoring and reporting of plan.

Regular meeting and awareness drives have been held with members of children and adolescent clubs, more than 1.88 lakh adolescent girls across six districts of Odisha were provided with information and knowledge about the impact of child marriage, legal provisions for prohibition of child marriage and mechanisms and programmes available with Government of Odisha for adolescent empowerment and ending child marriage.

More than 3.75 lakhs people including the front-line services providers, teachers, members of the School Management Committee, members of self-help groups and adolescent boys and girls took part in the mass pledging undertaken by the district administration on the eve of Gandhi Jayanti to end child marriage in Odisha. This campaign highlighted some of the important concerns of children like regular attendance of students in school, addressing the issue of nutritional deficiency of children, ensuring pre education to children, inclusion of adolescents in out of school in skill development programme, and addressing the issue of child labour.

Getting Sarita* back to school

On 21 May 2019 the Child Marriage Prohibition Officer (CMPO) of Lamtaput block was informed about a case of elopement. Mansing (name changed) a boy of 19 years, eloped with Sarita, a 14-year old girl. Mansing was a Class 11 drop out, and Sarita was in class VI. Sarita’s parents had encouraged her to run away. They had five more girls and perhaps did not know if they had anything better to offer Sarita.  When the CMPO got the information, she immediately informed the chairperson of the Child Welfare Committee (CWC) for support to rescue both the boy and girl. A team constituted by the CWC chairperson, the CMPO, supervisor, two male police officers, one female officer and the AAA District Coordinator went to rescue the girl. The team then enquired about the age of Sarita frrm the Anganwadi center and spoke to Sarita’s parents. Then the team went to the Mansing’s home. When they reached there, the team found that Sarita had been sent on to one of Mansing’s relatives to help build their home. Four members from the rescue team went on to rescue the girl, and eventually the team produced both the Sarita, Mansing and their parents before the Child Welfare Committee, Koraput district.

During the counseling, CWC members found that Sarita wanted to continue her study. She was also informed to CWC that her family had helped Mansing to elope her. So CWC members pass an order directing the District Welfare officer to enroll Sarita to an ashram school in a nearby block. With the order of CWC, the CMPO took help of District Welfare Officer, Koraput and enrolled Sarita in a nearby Ashram School in class VII, and Mansing was enrolled in a polytechnic college. The CWC requested the parents not to put any kind of pressure to discontinue the education of either Mansing or Sarita. The Chairperson, CWC alsoe directed the District Child Protection Officer to visit both Mansing and Sarita at their school, to ensure they continue their education. This how they got Sarita back to school. 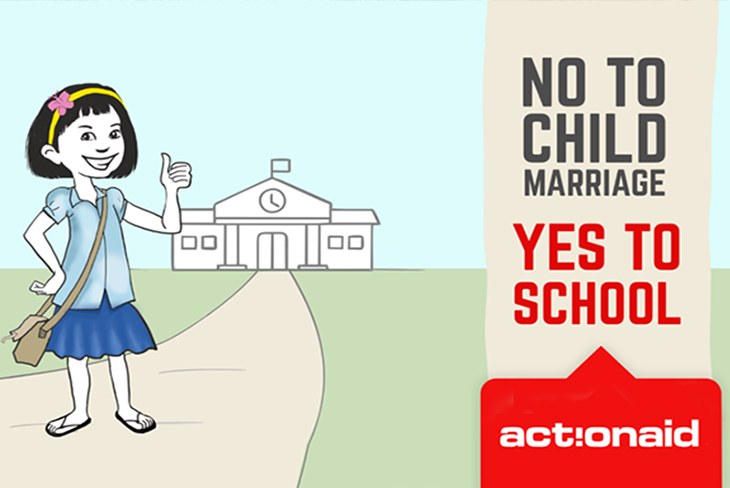