#SingleButNotAlone | A Campaign on the Rights of Single Women in Gujarat 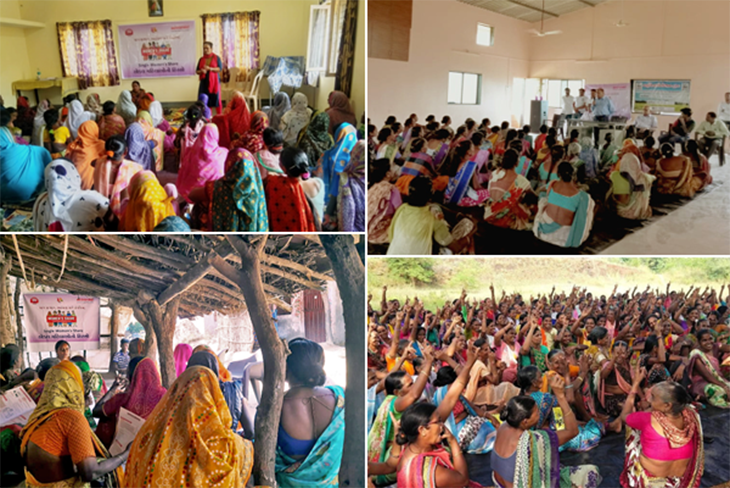 On October 18, 2022, ActionAid Association launched a campaign across ten districts of Gujarat to sensitise local communities on the wide-ranging issues faced by single women, strengthen community support mechanisms for them, and advance their access to rights and entitlements. The campaign also aimed towards furthering the demand for a state-level policy for single women to address related issues and effectively enable dignified lives and livelihoods. Held together with Ekal Nari Shakti Manch until December 10, 2022, the campaign covered 98 villages and urban locations in 19 blocks of Ahmedabad, Botad, Dang, Kutch, Navsari, Patan, Sabarkantha, Tapi, Vadodara and Valsad.
As part of the awareness drive, together with community-based human rights defenders, several village-level meetings were organised to enhance community understanding of the issues faced by single women and the rights to which they are entitled. Information, Education and Communication (IEC) material were also disseminated to augment the messaging reach. In addition, village and block-level conventions were facilitated, and meetings were held with Panchayat representatives and government officials to highlight the plight of single women and help shape the much-needed support system for them. The major issues included the various regressive practices and violence that single women are subjected to, mainly witch branding and their rights to property and social security.
The campaign was successful in sensitising community members, including the youth and Panchayat representatives, and in mobilising their solidarity with the agency of single women. Not just that, it empowered more than 1,100 single women to break the cycle of traditions to which they had long been subjected. Nearly 350 single women also took leadership to build community support mechanisms for women in need. Additionally, the intervention provided process and documentation support to 836 single women to enable their access to Government schemes and entitlements. The process of facilitating access to property rights for 28 single women was also initiated.