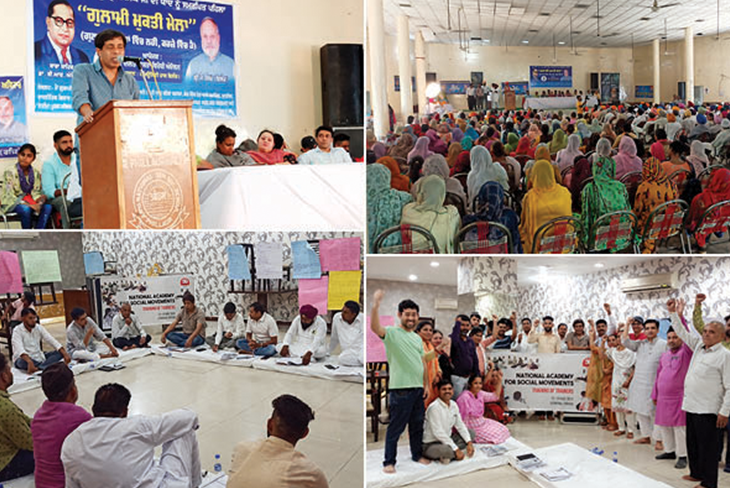 Despite the abolition of bonded labour in India in 1976, unfortunately, the practice persists, leading to varied human rights violations across the country. Dalit Dasta Virodhi Andolan (DDVA) has worked relentlessly to identify, rescue and rehabilitate bonded labourers. As a mark of tribute to Late Sh. Jai Singh ji, the founder of DDVA and Volunteers for Social Justice (VSJ), on his first death anniversary on May 22, DDVA and ActionAid Association facilitated a Gulami Mukti Mela in Phillaur, Punjab. The participants comprised over a thousand workers from nine districts of Punjab; these workers were earlier in bondage and then liberated through the efforts of DDVA under the leadership of Jai Singh ji. Community-based Human Rights Defenders (HRDs) from several states, including Punjab, Haryana, Himachal Pradesh and Delhi, also attended the programme.

We have started a National Academy for Social Movements to build capacities and strengthen the agency of social movements, workers’ collectives, community-led organisations and HRDs. As part of this initiative, we organised a Training of Trainers in Ludhiana, Punjab, on May 23-24. Social and ecological justice defenders from 17 districts across Haryana, Himachal Pradesh and Punjab attended the workshop.

Participants oriented themselves on human rights and social movements. The proceedings focused on creating community-based volunteers, running community-led campaigns and facilitating people’s access to rights and entitlements. Participants learnt how to lead dialogues with policymakers, network with allies, engage with media and campaign using social media. Group exercises built capacities to craft specific, measurable, achievable, relevant and time-bound (SMART) objectives for the campaigns. The workshop helped participants familiarise themselves with tools such as Pillars of Power, Power Mapping and Spectrum of Allies. Campaigners can use these tools to identify institutions, power holders and allies that could help further the cause of a social movement and to recognise potential hurdles. Armed with these insights, they could frame strategies accordingly. The workshop also examined the role of digital campaigns in amplifying people’s voices, raising their issues and connecting with the larger world to meet the desired objectives.