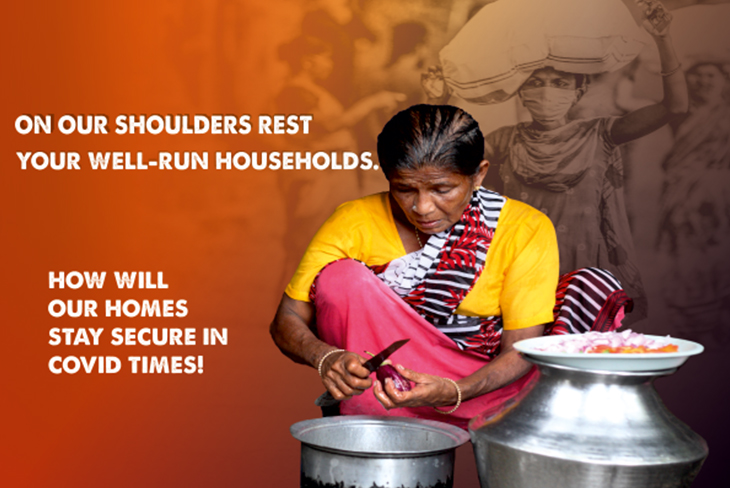 When the COVID-19 pandemic-induced lockdown was declared, those dependent on the informal economy were the first ones to be hit. The Union and State Governments and local administrations stepped forward with relief and support programmes for these workers. However, many remain without support, including domestic workers, most of whom are women. An estimated 50 million domestic workers today stare at an uncertain future as their wages have suffered hugely amid the prevailing crisis. After the national lockdown, several reports highlighted how the wages of domestic workers were withheld, and how they were stigmatized as “infection spreaders” and discriminated against. Domestic workers who returned to their native places are now struggling for a source of livelihood in their villages. Even after the lifting of the lockdown, as the fear of infection still looms large, domestic workers continue to face several restrictions on their movement and return to work.

To address the vulnerabilities being faced by domestic workers across the country, ActionAid Association launched ‘Support Domestic Workers | Give a Missed Call’ campaign. This initiative, which started in August 2020, and is running for three months, has been actively sensitizing community members and employers about the challenges being faced by this section of informal workers. The campaign has also been drawing the attention of the Government towards the plight of domestic workers. Read more about our campaign here.

We are delighted to share that we have received more than 18,000 endorsements in the form of missed calls expressing solidarity with the rights of domestic workers. The suggestions of the campaign also find reflection in the recent advisory issued by the National Human Rights Commission to the Union and State Governments. The document on ‘Human Rights of Informal Workers during COVID-19’, recommends the registration of domestic workers under the Labour Department and to provide them with cash and ration support.