Together with Communities, Changing the Narrative 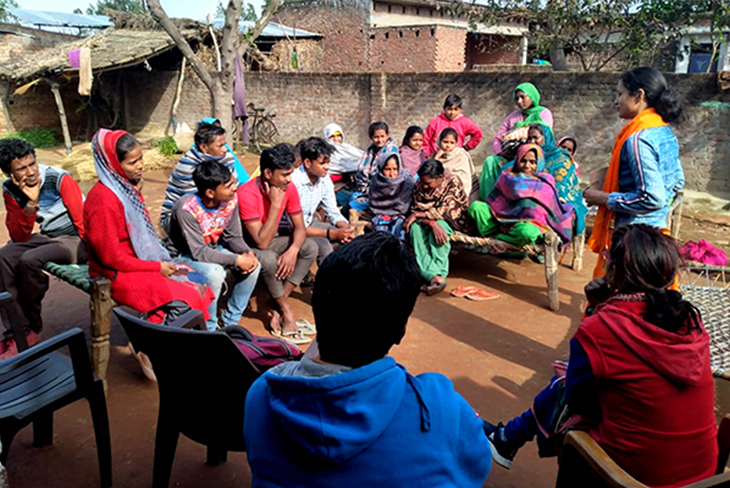 The deep-rooted gender inequality in our society manifests itself in several discriminatory beliefs and practices towards women and girls. With an aim of driving social change by eradicating gender-based discrimination and practices, we started a two-year programme in August 2018 in Muzaffarnagar district, Uttar Pradesh and Karauli district, Rajasthan. Run with support from UNFPA, we implemented it together with Astitva Samajik Sansthan and Alwar Mewat Institute of Education Development (AMIED) in UP and Rajasthan respectively. The districts above were chosen basis their low child sex-ratio, gender gap in literacy and early marriage practices. Covering a total of 400 villages from across these districts, the ‘Yeh Kahani Badalni Hai’ (‘Let’s Change the Narrative’) programme has been working towards sensitizing communities on gender inequality, and enabling them to question and challenge the existing discriminatory norms. A pivotal role in this initiative has been played by the community-based youth who were identified and capacitated as Change Agents to orient communities and to dialogue with local stakeholders, including members of Panchayati Raj Institutions and village-level frontline workers who could help influence communities’ mindsets positively.

Education of girls is one of the most critical areas of their empowerment, and yet millions of girls are denied this fundamental right! Through our ‘Yeh Kahani Badalni Hai’ (YKBH) programme, we tirelessly continued to engage with communities and local stakeholders on the issue of girls’ education. Simbhalki in Purkaji block of Muzaffarnagar recently witnessed something very heart-warming. A remote village, Simbhalki has a middle school but no high school or inter-college. The nearest one is 10 kilometres away in Chhapar village, and the way to it is through a forest. During one of the community discussions facilitated under YKBH programme, the issue of girls in Simbhalki having to drop out after Class VIII surfaced.

To explore solutions to this issue, the Change Agents associated with our programme held a discussion with local stakeholders. Recognizing the importance of girls’ education and the gravity of the situation, the Gram Pradhan, Roki, proposed plying an e-rickshaw between Simbhalki and Chhapar. Subsequently, he conducted a meeting with the village-based e-rickshaw drivers and explained to them the proposal. In fact, he also committed to paying the annual transport cost for the first lot of girls admitted. As a result, eight girls from the village took admission in Chhapar Inter-College for the first time. The Pradhan has now also started an endeavour towards setting up an inter-college in Simbhalki. That’s not all. He could also get 10 acres of land in the village allotted for girls’ playground. With sports equipment procured and girls all set to play, the village has now become an example for even the neighbouring villages to encourage girls’ access to education as well as sports and play.

During this programme, together with more than a thousand socially sensitive and well-trained Change Agents, we have been able to bring about several positive behavioural changes within the communities. Through community mobilization activities, including 486 public hearings and 514 street plays over two years, we helped break gender stereotypes, and address discriminatory practices. In 379 of the 400 intervention villages, the birth of girl children is now a moment of celebration and so are their birthdays! 296 of these villages witnessed a shift in the distribution of household chores, with many men now coming forward to share household responsibilities with women. The incidence of domestic violence and alcoholism have also reported a considerable decline in 223 villages. In 214 villages, several menstrual taboos have been broken. Furthermore, 260 villages saw girls who had dropped out after Class V or VIII being readmitted to school now, with girls from 197 villages in fact even moving to other villages or urban centres to access education. In 146 intervention villages, the practice of child marriage has been prohibited, and the community members are monitoring any instances of its violation.