Tribals from 10 states come together at Raipur, Chhattisgarh, to highlight their issues | ActionAid India
+91 80 25586293

Tribals from 10 states come together at Raipur, Chhattisgarh, to highlight their issues 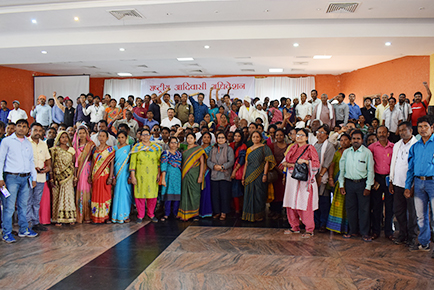 Nearly 300 delegates, representing around 50 organizations from across 10 states, came together at the Rashtriya Adivasi Adhiveshan (National Tribal Convention) in Raipur, Chhattisgarh, on March 28-29 to talk about tribal community values and issues. This two-day programme, facilitated by ActionAid Association, saw discussions on tribal existence, identity, dignity and development.

Keeping in mind the current situation and the historical injustices faced by tribal communities, participants at the convention felt that the government should consider a new treaty with tribal communities that builds confidence and hope, respects tribal identity and rights and has a vision for the betterment of tribal communities and all humankind. Recognizing the potential of the Gram Sabha in protecting natural resources, ensuring land and livelihood rights for tribals, and promoting tribal identity and cultures, the need to empower Gram Sabhas was also strongly articulated. Participants called for effective implementation of the Panchayats (Extension to the Scheduled Areas) Act and the Forest Rights Act. The rights and specific issues affecting Particularly Vulnerable Tribal Groups (PVTGs) and the Nomadic Tribes and De-Notified Tribes (NT-DNTs) were also discussed.

The discussions at the convention and the ideas emerging from among tribal communities were subsequently put together in the form of the Raipur Declaration.