Women in the driving seat, on the road to empowerment 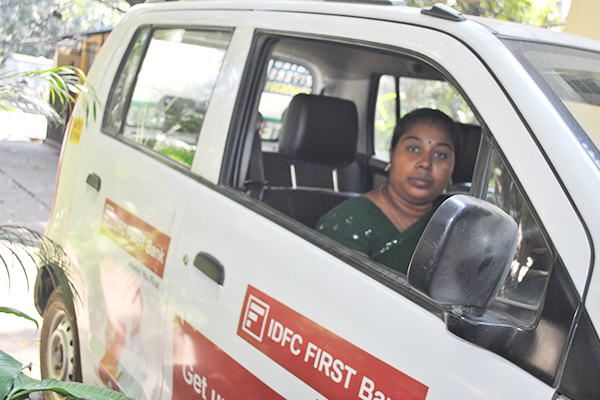 New beginnings bring new hopes. The life of 26-year-old Kokila living in the MCT colony of Bengaluru, Karnataka, recently saw a new beginning. Having studied till Class VIII, this mother of two young girls always wanted her children to get educated. But, since her husband, a carpenter, was an alcoholic and not regular at work, Kokila’s life wasn’t easy. She became a home-based worker, but her meager earnings, fluctuating between Rs. 6,000 and Rs. 8,000 a month, were not enough. This pushed the family into debt and the children had to drop out of school as a consequence.

Kokila learnt about a training programme on driving cars, run by the Karnataka Regional Office of ActionAid Association, with support from DXC Technology. She enrolled for the training. This bold decision of hers at first raised several challenges. Her husband was against this decision, and would lock her up to prevent her from going for the training. Brave Kokila then took another bold step, left her husband, and took her two children and went to stay with her mother.

On completing the training, Kokila appeared for tests with the various cab aggregators in the city. She remained unfazed by all obstacles that came her way, and continued working towards her goal of becoming an efficient driver. Her efforts paid off when she started working with Uber! Breaking gender stereotypes, Kokila now drives with efficiency and confidence on Bengaluru’s congested roads, working eight to nine hours a day, and earning at least Rs. 20,000 a month, besides other incentives. “This new beginning has brought me new hopes. This livelihood opportunity has empowered me not only financially but as a person. My children can now go back to school. Thank you for this transformation in my life,” says a beaming Kokila! Her husband has come back to live with her.

With Kokila, there are 10 more women in Bengaluru who have been placed as professional drivers with different aggregators. The training initiative on driving cars by ActionAid Association and DXC Technology running in Bengaluru, Karnataka, and Jaipur, Rajasthan, is part of a larger programme aimed at empowering young women from vulnerable communities to break gender stereotypes and socio-economic barriers through vocational skill training. To read more, click here.