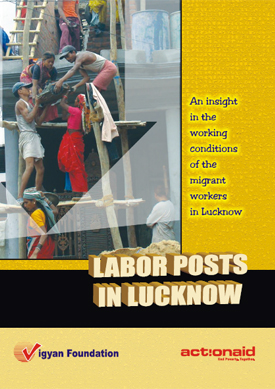 An insight in the conditions of the migrant workers in Lucknow

The history of labour addas in India is quite old. Initially the skilled laborers migrated to bigger cities and searched for work while the presence of unskilled labour force was minimal. During 1844-1860, which symbolized the land resettlement era, the community land converted in to private land holdings. At the same time the centralization/pooling of land started in India in the form of Zamindari System and exploitative provisions were made for extraction of various taxes in the name of lagaan. On analysis we find that there is direct correlation between concentration of land and development of labour markets, the same phenomenon has also led to end of collective ownership of land and increase in unskilled labour force.