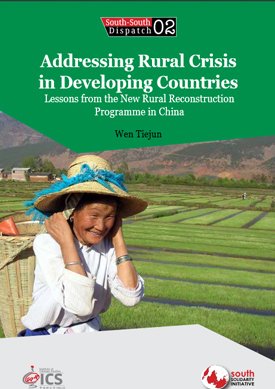 One of the major reasons behind the persistence of poverty in India is the unrelenting agrarian crisis faced by the majority of rural people. Low agricultural productivity has been listed as one of the major structural constraints facing the Indian economy in the latest Economic Survey. The same document also revealed the unprecedented decline in cultivators in absolute terms – a fact that carries with it an eloquent testimony of the hardship faced by the small and marginal farmers and landless labour in rural areas. The failure of the structural adjustment policies initiated in the early 1990s to tackle the agrarian crisis is evident in how rural and agrarian distress has now emerged as a phenomenon not just in India but also in the Global South.

The New Rural Reconstruction (NRR) programme that emerged in China in 2003 has over the years achieved significant success and has generated valuable les -sons on rural transformations. The learnings are in the fields of inclusive growth and ecologically sustainable development. Prof Wen Tiejun is not just a renowned expert on these issues, but also someone who has theorized and popularized strategies for dealing with the agrarian crisis in China in the late 1980s, and with his colleagues launched the NRR programme. This publication entitled “Addressing Rural Crisis in Developing Countries” has tried to capture Prof Wen’s presentations, ideas and inter – actions on the subject with leading experts in India.

“Addressing Rural Crisis in Developing Countries” is the second in the series of our South-South Dispatches. These short briefing papers provide diverse insights and analysis on regional and global developments from Southern perspectives. The South Solidarity Initiative, a knowledge-activist hub hosted by ActionAid India, shares these dispatches, though the specific views expressed by the authors may not necessarily reflect those of our organization.

ActionAid recognizes that in today’s context there is renewed interest in the idea of South-South cooperation, South-South solidarity and “projects of the south”. As Governments of the South are increasingly forging collaborative projects, the question of rural transformations and rurban, gains renewed importance and per- tinence in order to advance systemic alternatives that strengthen the cause of a new Internationalism of the south.

Through these dispatches we aim to contribute to such perspectives from activ- ists and academics across the South.

We look forward to continued conversations around these themes.