Food for the Hunger, Work for The Poor 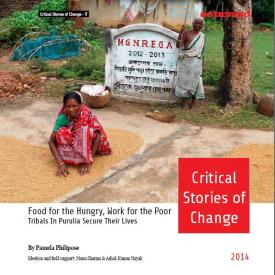 Critical stories of change is a series of stories describing the role ActionAid International plays in changing the lives of people living in poverty. But in their openness, self-criticism, detailed analysis and celebration of the active role of others, the stories are far removed from self-congratulatory ‘good practice case studies’. Critical stories of change are full of life, and are intended to impart the insights, advice and confidences of a friend. ActionAid International often makes claims for its work and achievements. Yet, in the struggle to address the causes of poverty and injustice, ActionAid is often one of many players. What ActionAid rarely gets to know is the significant nature of its contribution and the factors that contributed to the outcomes.The stories are the product of a facilitated learning process and aim to explore how change (both negative and positive) happens from the perspectives of different stakeholders. These are stories that explicitly link ActionAid and its partners’ grassroots work to a rights agenda and hopefully capture the full complexity of ActionAid’s development interventions and experiences: from the perspective of poor people, partners and organisation(s) and other stakeholders involved, as well as ActionAid itself. The documented lessons and experiences will hopefully provide insights for all those engaged in the struggle against poverty and injustice.AcknowledgementsCyclone Phailin had hit the eastern coast of India just ten days earlier and the skies remained overcast with intermittent rain as we made our way to Bengal’s Purulia district. In the circumstances, I was grateful for ActionAid India’s Manu Sharma’s sound sense of logistics, besides his ability to pitch in with Bengali translation and photography. Ashok Kumar Nayak, programme officer at ActionAid’s Kolkata office, was very familiar with the situation on the ground and seemed to have an instant connect with local communities. He also demonstrated immense patience in translating what was said and answering my innumerable queries. For this help, I thank him. Two people who literally captained us through the terrain were Khagan Chandra Mahato and Nakul Baske, both of them from the Banchita Jana Jagarana Adhikar Samity (BJJAS). They always commute to the various BJJAS locations on a motorbike even when darkness falls over the hills and forests of the area with only the chirping of crickets to guide them. I salute courageous activists like them who keep going despite great odds. The warmth with which the poorest households greeted us was also remarkable. Kanaklata Murmu, when she heard we were coming, got up early in the morning to prepare a delicious meal for us despite constraints on her time and resources. Looking back, one is humbled by such spontaneous expressions of grace and goodwill.