Impact of Drought and Alternative for Mitigation 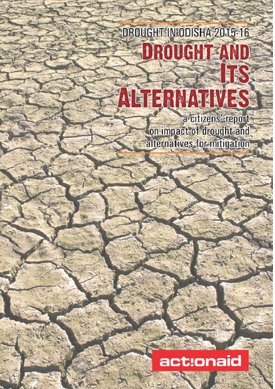 A primary drought assessment done by ActionAid in 38 villages (covering districts of Bargarh, Kandhamal, Sundergarh, Ganjam, Bolangir, Koraput and Nuapada) in Odisha on May 2016 show that about 57% of the ponds and bandhas created by MGNREGA have failed to work because the structures were badly planned with the inlets and outlets damaged. An estimate by Down to earth (1-15, May 2016) says 12.3 million water conservation DROUGHT IN ODISHA 2015-16 Drought and Its Alternatives

structures have been created under MGNREGA. And it comes 21 structures per villages. India’s drought related expenditure since independence is Rs. 3.5 lakh crores. 64% of the total expenditure under MGNREGA was on agriculture and agriculture-related works. From its inception in 2006 to March 2016, the government has spent over Rs. 3 lakh crore on MGNREGA. The ActionAid study further says that, 70% of the required food is not there for the drought affected families since many of them have not received the ration since February 2016. Thus the government programmes which were meant to provide employment, protection against shortfall of food grains need to be very effective to provide a safety net during the drought. MGNREGS has failed to check migration due to lack of work opportunity and delayed payment. Roughly 20% people have migrated in the villages surveyed. These social security programmes provide much relieved succour at the times of drought. Although government has announced 150 days of employment under MGNREGA, hardly 1% of the people surveyed in the village have got 150 days of employment. The drought package announced

by State government and the Supreme Court (SC) of India (May 2016) orders on drought could provide good support to the communities in times of drought. Unfortunately not many in the villages are aware about these packages and SC announcements.