Issues and Concerns of the Children 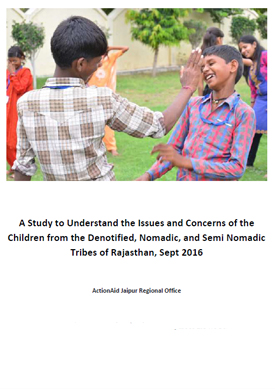 For the purpose of the study children belonging NT and DNT population from 12 different regions were interviewed. Most of the children were in the age group of 10-16 years. These children were selected on the basis that who can be best to share their issues and concerns with the larger audience. The interviews were later verified with their parents or community member/ facilitators who had accompanied these children’. The findings were later validated in the meetings and dialogues with children and the learnings were captured during the workshop of the convention.