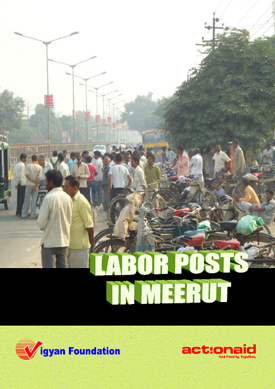 Urbanization is on a steep rise and census 2011 data too reveals a growing urbanization trend. Agriculture as a sector has witnessed decreasing government investment and the highly hyped ambitious government scheme MNREGA too has failed to curb the rural urban migration. Hundreds of rural men and women come to the city in search of work and better prospects for their children. This huge workforce is either unskilled or semi skilled and end up as rickshaw pullers, domestic workers or construction labour.

The present study tries to capture the conditions prevalent at these unrecognized labour posts and also tries to investigate the broader reasons for migration and coping strategies of the workers. The idea is to put forward the demand for recognition and regularization of the labour posts as these are the labour stations and should be given adequate space in city planning just as fruit/vegetable market, rickshaw stand etc.