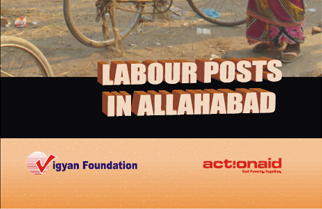 Construction workers constitute the largest section of the unorganized work force in India. The place where these people collect, interact and bargain with their prospective employers for the day/s is termed as labour adda, labour chowk or labour post. These places are generally the cross roads or road sides, mostly in the busy commercial spaces of the city and often on the target of the local police, shopkeepers and commuters as creating traffic congestion and obstruction of the normal city space.

The present study tries to capture the conditions prevalent at these unrecognized labour posts and also tries to investigate the broader reasons for migration and coping strategies of the workers. The idea is to put forward the demand for recognition and regularization of the labour posts as these are the labour stations and should be given adequate space in city planning just as fruit/vegetable market, rickshaw stand etc.