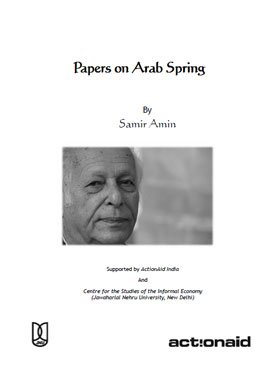 The year 2011 began with a series of shattering, wrathful explosions from the Arab peoples. Is this springtime the inception of a second ‘awakening of the Arab world?’ Or will these revolts bog down and finally prove abortive – as was the case with the first episode of that awakening, which was evoked in my book L’Eveil du Sud (Paris: Le temps des cerises, 2008). If the first hypothesis is confirmed, the forward movement of the Arab world will necessarily become part of the movement to go beyond imperialist capitalism on the world scale. Failure would keep the Arab world in its current status as a submissive periphery, prohibiting its elevation to the rank of an active participant in shaping the world.