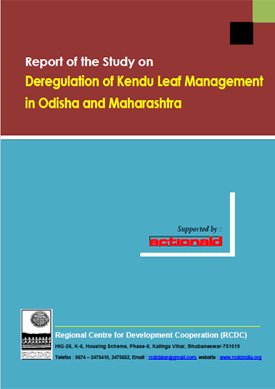 Kendu/Tendu Leaves (KL/TL) is one of the most important sources of income for tribal communities and rural people living in and around forests in central Indian States. It can provide up to 45 million person days per year. Apart from its importance in terms of employment generated, it contributes substantially to the state exchequers of states in Central Indian State. Nearly 15 lakh families benefit from collection and trade of Tendu leaves in this region. 85 percent of the total country’s production is collected from Madhya Pradesh, Chhattisgarh, Odisha, Maharashtra and Andhra Pradesh. The state of Madhya Pradesh is the major Tendu Leave producing state (58.01% of the country’s total production) followed by Odisha (12.94%), Maharashtra (10.60%) in topical dry deciduous forests.

For the last few years, the state Government faced public and legal pressure to hand over the rights of Kendu leaf to the Gramsabha to collect, transport, store and dispose the same as it is the owner of the MFPs (minor forest produces) as per the Schedule Tribes and Other Traditional Forest Dwellers (Recognition of Forest Rights) Act 2006 as well as the PESA Act, 1996 applicable for the Scheduled Areas. During 2013 crop season Odisha Government deregulated the Kendu Leaf operation in Nabarangpur.